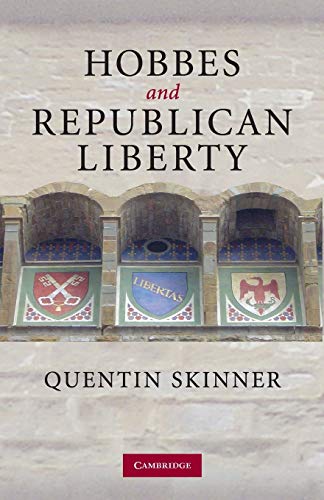 Quentin Skinner is one of the foremost historians in the world, and in Hobbes and Republican Liberty he offers a dazzling comparison of two rival theories about the nature of human liberty. This book complements Professor Skinner's Liberty before Liberalism, and is a work of similar breadth and power.

'... Skinner breathes new life into historical Republican thinking... Skinner's explanation of the exposition gives logical shape to Hobbes - Skinner gets down the polemical force of 'Leviathan' and sets it free. ... Skinner's circumspection reconstructs Hobbes' arguments, and proves that James Harrington was right in his criticism of Hobbes - his won evidence puts his 'freedom theory' to blame. A definition is not a demonstration.' Frankfurther Allgemeine Zeitung

' ... characteristically lucid, elegant and, on its own terms, persuasive.' London Review of Books

'It is not necessary to share Skinner's preoccupations or enthusiasms to recognise the virtues of this book. It is elegant and erudite.' The Times Literary Supplement

'... when the Regius Professor of Modern History of Cambridge purports to offer a brand new reading of arguable the earliest significant work of English political philosophy, the mere possibility of centuries of conventional reading being set aside will prompt controversy and much deserved attention. ... Skinner's new book offers us a concept of actual or practical human possibilities in our liberty or freedom that better identifies our natural and inalienable human rights than does a pure or absolute definition of liberty or freedom.' Supreme Court of Queensland Library Review of Books

'... surely a valuable contribution to the existing body of Hobbes scholarship. Rich in well-documented references to figures of slight repute, but whose influence on Hobbes's thought can hardly be disregarded, this work doubtlessly constitutes one of the most important accounts of the Hobbesian idea of freedom ... this excellent book does itself contribute significantly to our understanding of Hobbes's notion of 'liberty' in the framework of his oeuvre and as such ought to take an important place in the existing body of Hobbes literature.' CEU Political Science Journal

Quentin Skinner is one of the leading historians in the world and Regius Professor of Modern History at the University of Cambridge.

Descripción Paperback. Condición: New. Language: English. Brand new Book. Quentin Skinner is one of the foremost historians in the world, and in Hobbes and Republican Liberty he offers a dazzling comparison of two rival theories about the nature of human liberty. The first originated in classical antiquity, and lay at the heart of the Roman republican tradition of public life. Thomas Hobbes was the most formidable enemy of this pattern of thought, and his successive attempts to discredit it constitute a truly epochal moment in the history of Anglophone political thought. Hobbes and Republican Liberty develops several of the themes announced by Quentin Skinner in his celebrated inaugural lecture on Liberty before Liberalism of 1997. Cogent, engaged, accessible, and indeed exhilarating, this new book will appeal to readers of history, politics, and philosophy at all levels from upper-undergraduate upwards, and provides an excellent introduction to the work of one of the most celebrated thinkers of our time. Nş de ref. del artículo: AAV9780521714167