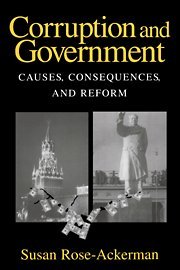 This book suggests how high levels of corruption limit investment and growth can lead to ineffective government. Corruption is a worldwide phenomenon that creates economic inefficiencies and inequities and negatively affects the political process as well. Effective reform cannot occur unless both the international community and domestic political leaders support change.

'Susan Rose-Ackerman is the founder of the recent political-economic literature on corruption. In this book she extends and deepens her earlier analysis to cover the manifold aspects of this persistent problem and provides a balanced and sophisticated discussion of the necessary reform agenda for both domestic actors and the international community. As governance and institutional issues get primacy in the academic literature and public policy discussion, this book will be a major reference volume.' Pranab Bardhan, University of California, Berkeley

'Susan Rose-Ackerman's Corruption and Government is a rich survey of the economics and politics of corruption, with attention to apparent cultural differences and a tough effort to commend devices for reform. The author offers accounts of successful programs of ending or massively reducing varied forms of corruption, and she give reason to believe that, once corruption is overcome, the practice of clean government can be very stable.' Russell Hardin, New York University

'Comprehensive in coverage but crisp in exposition, Corruption and Government applies a variety of analytic frames to the many forms of governmental corruption. It elucidates why corruption cannot be treated simply as another method for markets to clear and over-come bureaucratic impediments. It also provides sensible and informed suggestions about what reforms can accomplish.' Peter Reuter, University of Maryland

'Susan Rose-Ackerman is an authority on the world-wide phenomena of corruption ... Susan Rise-Ackerman's book offers a clear cut analysis of corruption, particularity at the interface of government and the market. She spells out how corruption is not just as an economic problem but intimately bound up with politics ... the book is manageable, written in a clear and crisp style providing a scholarly survey of just what a daunting, complex and important problem corruption is.' African Business

'Rose-Ackerman emphasizes the role of international organizations as well as domestic reformers, but notes that the breadth of their efforts must be matched by depth of detail and commitment if the new international policies and treaties are to be effective.' Michael Johnston, Colgate University

'Corruption and Government is a fine study of a costly phenomenon affecting countries at all levels of development. It uses economic theory to make arguments about the causes and consequences of corruption. Illustrations are drawn from a number of countries and from international organizations to illuminate key arguments. Scholars who work within the economic paradigm will find the book to be a stimulating synthesis and guide to reforms, while those in both the academic and practitioner communities less familiar with this paradigm will find the book both comprehensive and accessible.' Charles H. Levine 2000 Book Award Selection Committee

'Susan Rose-Ackerman's Corruption and Government: Causes, Consequences, and Reform makes a fresh and valuable contribution to existing literature on ethics in government. This book is recommended for everyone who is concerned about the devastating effect of corruption on effective and efficient service delivery by governments, especially in African and other countries of the South.' Politeia