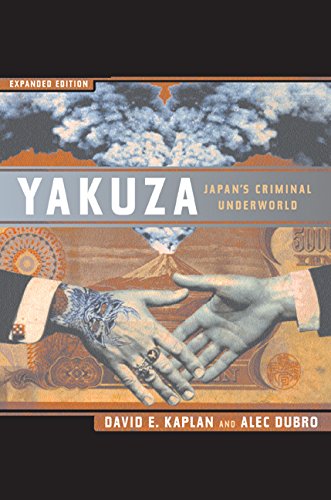 "The book is laden with fascinating information, some of it heretofore unavailable in English." "A superb study of Japan's underworld that is both entertaining and revealing. The authors miss none of the color and curious detail of the yakuza style, but at the same time go far beyond surface observations." "Blend the Mafia with the Masons. Let them simmer a while, then fold in the Ku Klux Klan and you'll have the yakuza....Important and timely...Yakuza will serve for years as the source document on Japanese organized crime." "State-of-the-art investigative reporting...must reading for those who consider themselves already highly conversant with yakuza activities...disturbing."

Known for their striking full-body tattoos and severed fingertips, Japan's gangsters comprise a criminal class eighty thousand strong--more than four times the size of the American Mafia. Despite their criminal nature, the yakuza are accepted by fellow Japanese to a degree guaranteed to shock most Westerners. Here is the first book to reveal the extraordinary reach of Japan's Mafia. Originally published in 1986, Yakuza was so controversial in Japan that it could not be published there for five years. But in the West it has long served as the standard reference on Japanese organized crime, inspiring novels, screenplays, and criminal investigations. David E. Kaplan and Alec Dubro spent nearly two decades conducting hundreds of interviews with everyone from street-level hoodlums and police to Japan's most powerful godfathers. The result is a searing indictment of corruption in the world's second-largest economy. This updated, expanded, and thoroughly revised edition of Yakuza tells the full story of Japan's remarkable crime syndicates, from their feudal start as bands of medieval outlaws to their emergence as billion-dollar investors in real estate, big business, art, and more.