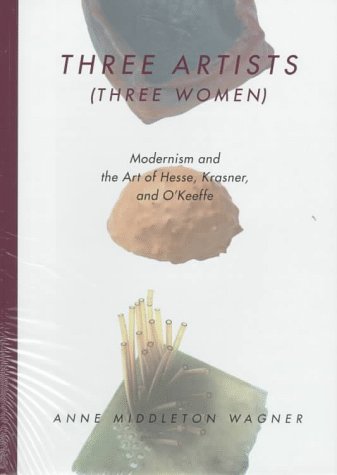 "This is a book, " writes Anne Wagner, "about three artists. In particular it concerns the character of their imagery, the paths of their careers, and the ways these were influenced, for good and ill, by one central circumstance: the fact that the artists were women." The artists are Georgia O'Keeffe, Lee Krasner, and Eva Hesse. Their work is linked to three moments in the history of modernism in the United States - the utopian confidence of the 1920s avant-garde, the grimmer heroics of the New York School, and the all-or-nothing redefinition of art in the 1960s. They belonged profoundly to those moments, and believed that modernist practice offered them ways to make work that would speak directly to their bodily experience, their feelings, and their intellectual ambitions. Modernism for them above all meant abstraction or, better still, the possibility of operating between the figurative and the abstract, in a territory where bodily identities and mental orderings might be radically remade. From a feminist perspective (which is that of this book) certain aspects of this confidence in modernism now seem misplaced. Modernist art, like all other art practices in the twentieth century, was strongly gendered. O'Keeffe, Krasner, and Hesse were offered places within it as women. If they thought that modernism would let them state for themselves what "as women" might mean, they were over-optimistic. But not wholly misguided. This book is about the battle in these artists' work to seize hold of the means of representation - including the representation of gender and sex. Some of the time the battle was lost. The enemy was well entrenched. But what remains remarkable is how often, against theodds, O'Keeffe, Krasner, and Hesse took charge of modernism's resources and turned them to their ends.

1. Three Artists (Three Women): Modernism and the Art of Hesse, Krasner, and O'Keeffe

2. Three Artists (Three Women): Modernism and the Art of Hesse, Krasner, and O'Keeffe

3. Three Artists (Three Women): Modernism and the Art of Hesse, Krasner, and O'Keeffe

5. Three Artists (Three Women): Modernism and the Art of Hesse, Krasner, and O'Keeffe