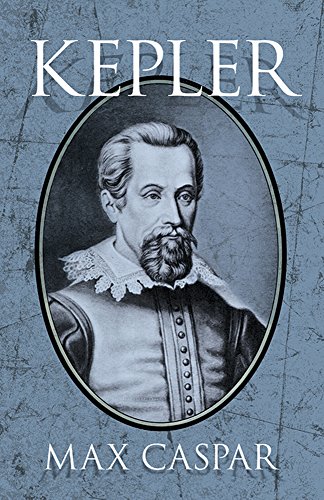 Owen Gingerich is Professor of Astronomy and of the History of Science, Emeritus, at the Harvard Smithsonian Center for Astrophysics.

Descripción Paperback. Condición: New. Paperback. Definitive biography by foremost scholar offers fascinating erudite picture of great mathematician's scientific accomplishments: formulation of laws of planetary motion, work with optics a.Shipping may be from multiple locations in the US or from the UK, depending on stock availability. 464 pages. 0.463. Nş de ref. del artículo: 9780486676050

Descripción Dover Publications Inc., United States, 1994. Paperback. Condición: New. Reprint. Language: English. Brand new Book. A towering figure in intellectual history and one of the fathers of modern astronomy, the great mathematician Johannes Kepler (1571-1630) is best known for his discovery of the three laws of planetary motion, which paved the way for a dynamic explanation of the heavenly phenomena. At a time when the Ptolemaic view still prevailed in official circles, Kepler undertook to prove the truth of the Copernican world view and through exceptional perseverance and force of intellect achieved that goal. His epochal intellectual feats are completely and thoroughly described in this splendid work, considered the definitive biography of Kepler. Drawing on a wealth of primary sources, the author presents a fascinating and erudite picture of Kepler's scientific accomplishments, his public life (work with Tycho Brahe, the Danish astronomer; mathematical appointments at Graz, Prague, and Linz; pioneering work with calculus and optics, and more) and his personal life: childhood and youth, financial situation, his mother's trial as a witch, his own lifelong fear of religious persecution, his difficulties in choosing one of eleven possible young women as his second wife, and more, through his last years in Ulm and death in Regensburg.Until his death in 1956, Professor Max Caspar was the world's foremost Kepler scholar. He had spent over two-thirds of his life assembling, cataloging, describing, analyzing, and editing Kepler's works. To this biography he brought tremendous learning and passionate enthusiasm for his subject, creating an unsurpassed resource on the life and work of one of history's greatest scientific minds. Originally published in German and superbly translated into English by C. Doris Hellman, Kepler will fascinate scholars and general readers alike. Nş de ref. del artículo: AAC9780486676050