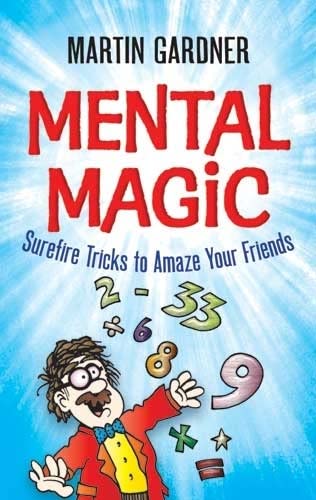 Professor Picanumba has dozens of surefire tricks up his sleeve. Using a deck of cards, dice, calculator, pencil, and paper, he'll show junior mathemagicians how to predict the answers to 88 word and number challenges that will amaze friends and family. Includes solutions, plus 64 fun illustrations.

Martin Gardner was a renowned author who published over 70 books on subjects from science and math to poetry and religion. He also had a lifelong passion for magic tricks and puzzles. Well known for his mathematical games column in Scientific American and his "Trick of the Month" in Physics Teacher magazine, Gardner attracted a loyal following with his intelligence, wit, and imagination. Martin Gardner: A Remembrance The worldwide mathematical community was saddened by the death of Martin Gardner on May 22, 2010. Martin was 95 years old when he died, and had written 70 or 80 books during his long lifetime as an author. Martin's first Dover books were published in 1956 and 1957: Mathematics, Magic and Mystery, one of the first popular books on the intellectual excitement of mathematics to reach a wide audience, and Fads and Fallacies in the Name of Science, certainly one of the first popular books to cast a devastatingly skeptical eye on the claims of pseudoscience and the many guises in which the modern world has given rise to it. Both of these pioneering books are still in print with Dover today along with more than a dozen other titles of Martin's books. They run the gamut from his elementary Codes, Ciphers and Secret Writing, which has been enjoyed by generations of younger readers since the 1980s, to the more demanding The New Ambidextrous Universe: Symmetry and Asymmetry from Mirror Reflections to Superstrings, which Dover published in its final revised form in 2005. To those of us who have been associated with Dover for a long time, however, Martin was more than an author, albeit a remarkably popular and successful one. As a member of the small group of long-time advisors and consultants, which included NYU's Morris Kline in mathematics, Harvard's I. Bernard Cohen in the history of science, and MIT's J. P. Den Hartog in engineering, Martin's advice and editorial suggestions in the formative 1950s helped to define the Dover publishing program and give it the point of view which ― despite many changes, new directions, and the consequences of evolution ― continues to be operative today. In the Author's Own Words: "Politicians, real-estate agents, used-car salesmen, and advertising copy-writers are expected to stretch facts in self-serving directions, but scientists who falsify their results are regarded by their peers as committing an inexcusable crime. Yet the sad fact is that the history of science swarms with cases of outright fakery and instances of scientists who unconsciously distorted their work by seeing it through lenses of passionately held beliefs." "A surprising proportion of mathematicians are accomplished musicians. Is it because music and mathematics share patterns that are beautiful?" ― Martin Gardner

Descripción Dover Publications Inc., United States, 2010. Paperback. Condición: New. Jeff Sinclair Ilustrador. Dover. Language: English. Brand new Book. A barber in Chicago says he'd rather cut the hair of ten red-headed men than the hair of one brown-haired man. Can you guess why?Ask Professor Picanumba, a master of riddles who carries dozens of surefire tricks up his sleeve. He'll show you how to astonish your friends and family by predicting the answers to 88 word and number challenges. These tricks require only simple props -- a deck of cards or a couple of pairs of dice, a calculator, and a pencil and paper. With or without an audience, these foolproof feats of mental magic offer hours of amusement. Solutions appear at the end, with 64 illustrations in thor Martin Gardner has written more than 70 books on subjects from science and math to poetry and religion. Well known for the mathematical games that appeared in Scientific American for decades and for his Trick of the Month column in Physics Teacher magazine, Gardner has had a lifelong passion for magic tricks and puzzles. Nş de ref. del artículo: AAC9780486474953