Artículos relacionados a Three Narratives of Slavery: Narrative of Sojourner...

Three Narratives of Slavery: Narrative of Sojourner Truth/Incidents in the Life of a Slave Girl/The History of Mary Prince: A West Indian Slave Narrative (African American) 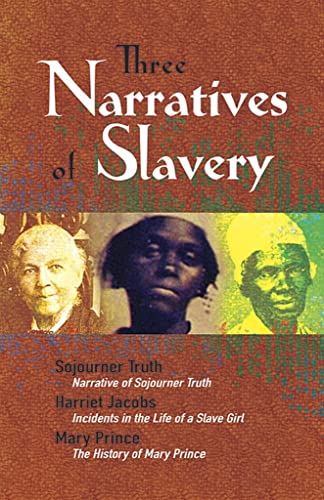 Straightforward, yet often poetic, accounts of the battle for freedom, these memoirs by three courageous black women vividly chronicle their struggles in the bonds of slavery, their rebellion against degrading injustice, and their determination to attain racial equality. Includes Narrative of Sojourner Truth, Incidents in the Life of a Slave Girl, and The History of Mary Prince.

Sojourner Truth, born into slavery in the late 1790s as Isabella Baumfree, was the first African-American woman to win a court case when she reclaimed her son from the man who sold him back into slavery after his emancipation. After changing her name, Truth travelled as a Methodist preacher and spoke out regularly on behalf of the abolitionist cause. In 1851, at the Ohio's Women Rights Convention, Truth delivered her most well-known speech "Ain't I a Woman?" During her lifetime, Truth spoke out about many causes, including women's suffrage, prison reform, property rights for former slaves, and she encouraged African-Americans to enlist in the Union Army. Her activism led her to make connections with many of her contemporary abolitionists such as Harriet Beecher Stowe and Frances Gage. In 1850, Truth's dictated her memoir, The Narrative of Sojourner Truth, to her friend Olive Gilbert and the title was soon met with acclaim by abolitionist readers and supporters. Truth died in 1883 and was buried alongside her family in Battle Creek, Michigan.

Harriet Jacobs (1813-1897) was a slave in North Carolina who escaped to the North and wrote Incidents in the Life of a Slave Girl, an autobiographical account of her experiences.