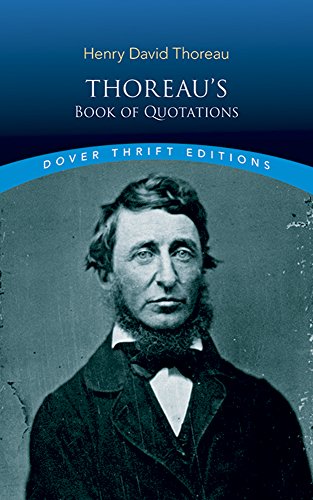 In more than 600 striking, thought-provoking excerpts, grouped under 17 headings, Thoreau rails against injustice, gives voice to his love of nature, and advocates simplicity and conscious living. Note.

Essayist, poet, and philosopher, Henry David Thoreau (1817-62) ranks among America's foremost nature writers. The Concord, Massachusetts native spent most of his life observing the natural world of New England, and his thoughts on leading a simple, independent life are captured in his best-known work, Walden.

2. Thoreau: a Book of Quotations (Paperback)

Descripción Dover Publications Inc., United States, 2011. Paperback. Condición: New. Language: English. Brand new Book. To Emerson and other New England transcendentalists who knew him best, Thoreau often seemed prickly and antisocial. But in his writings he was (and is) a man anyone would treasure as a friend, sounding board, and spiritual advisor -- a man who trafficked in that rarest of commodities, the truth. Even now, almost 140 years after his death, his voice remains clear and compelling, and his truths are as relevant and meaningful as they were in his lifetime.In this treasury of more than 450 striking, thought-provoking excerpts from his writing, you will hear him railing against injustice, giving voice to his love of nature, and advocating the simplicity and conscious living that he brought to fruition during his two-year stay at Walden Pond. "To be serene and successful we must be at one with the universe." "Our life is frittered away by detail. Simplify, simplify."Grouped under 17 headings, including "Education," "Freedom and Individualism," "Friendship and Love," "Human Nature," "Literature and Writing," "Nature," "Season," and "Solitude," the quotations include such favorites as "The mass of men lead lives of quiet desperation" and "Some circumstantial evidence is very strong, as when you find a trout in the milk." Whatever category they are in, Thoreau's observations provide so much inspiration and intellectual nourishment that browsing through this book becomes an exciting voyage of discovery into the heart of the human condition. Nş de ref. del artículo: AAC9780486414287

3. Thoreau: a Book of Quotations (Paperback)

Descripción Paperback. Condición: New. Paperback. In more than 600 striking, thought-provoking excerpts, grouped under 17 headings, Thoreau rails against injustice, gives voice to his love of nature, and advocates simplicity and conscious.Shipping may be from multiple locations in the US or from the UK, depending on stock availability. 64 pages. 0.059. Nş de ref. del artículo: 9780486414287

9. Thoreau: a Book of Quotations

10. Thoreau : A Book of Quotations