Artículos relacionados a The Greatest Puzzles of All Time (Dover books on mathematica...

The Greatest Puzzles of All Time (Dover books on mathematical & logical puzzles, cryptography, and word recreations) 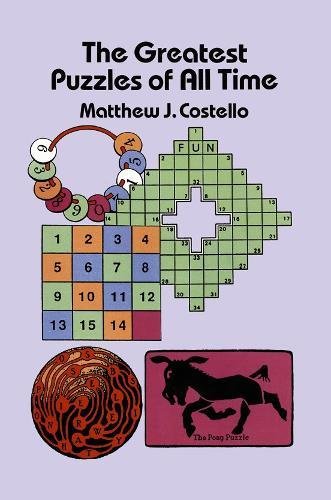 Challenging collection includes some of the world's most perplexing brain-teasers by such masters as Sam Loyd, Johnny Eck, and Henry Dudeney. Also, the stories behind the creation of the puzzles, the earliest riddles, the birth of the crossword puzzle, much more. Introduction. 146 illustrations.

This challenging collection of conundrums encourages puzzle lovers to get out the pencil, paper, or even the computer and try their hand at some of the world's most perplexing brainteasers. Included are time-honored classics as well as groundbreaking creations that will test the mettle of even the most persevering puzzlist. Some are tinged with murder, mystery, and magic. Others exude charm and, occasionally, a dash of whimsy—but they're all clever.
Also here are the dramatic stories behind the creation of many famous puzzles, as well as exciting accounts of the great Houdini and the magical arts of the incredible Johnny Eck, Sam Loyd, Henry Dudeney, and other leading exponents of mystification. You'll learn about the world's earliest riddles, the birth of the crossword puzzle, the puzzle magic of Lewis Carroll, and such intriguing subjects as the Lure of the Labyrinth; Hoaxes, Hokum, and Real Horrors; 3-D Puzzles; Murder and Mayhem, and much more.
A great way to baffle friends and acquaintances, this wide-ranging sourcebook will fascinate anyone with a logical mind and a disposition to test it.
Unabridged Dover (1996) republication of the edition published by Prentice Hall Press, New York, 1988.

1. The Greatest Puzzles of All Time

2. The Greatest Puzzles of All Time [Paperback] Costello, Matthew J.

3. THE GREATEST PUZZLES OF ALL TIME