Artículos relacionados a The Life of Black Hawk (Native American) 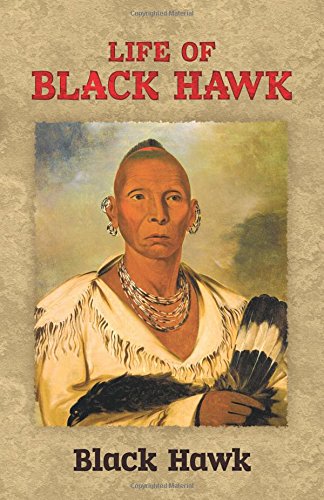 3. The Life of Black Hawk (Paperback)

Descripción Dover Publications Inc., United States, 1994. Paperback. Condición: New. New edition. Language: English. Brand new Book. Westward expansion of the American frontier was not without its attendant tragedies -- many of which involved injustices committed against Native Americans. One such tragedy took place in the early nineteenth century, when the Sauk and Fox Indians, led by a dynamic tribal chieftain named Black Hawk (1767-1838), resisted the establishment of white settlements in Indian territory in western Illinois. The Indians were slaughtered in the resulting brief but violent conflict now known as the Black Hawk War.In the late summer of 1833, following his release from federal prison where he had been held for waging war against the U. S. government, Black Hawk expressed a desire to have his life's history written and published, so that "the people of the United States might know the causes that had impelled him to act as he had done, and the principles by which he was governed." The result was the unique document reprinted in this volume -- the autobiography of Black Hawk dictated by himself to a U. S. interpreter for the Sauk and Fox Indians.This powerful, partisan account of Black Hawk's life describes his participation in the War of 1812 with British troops (an act of revenge against the United States, incurred by government annexation of lands he insisted were not relinquished by his tribe) and his unsuccessful attempts to resist westward expansion of white settlements into Indian territory, which resulted in the uprising of 1832. Details follow of his capture, imprisonment and eventual release in 1833 to a rival chieftain -- a blow to his pride from which the Sauk warrior never recovered. Additional material provides vivid descriptions of tribal traditions, Indian wars in which he took part as a young brave, and the manners and customs of life in his Rock-River village.Of great interest to students and scholars of American history, this authentic firsthand document offers an unparalleled glimpse into the mind of an important Indian leader and a superb picture of Native American life and culture in the early nineteenth century. Nş de ref. del artículo: AAC9780486281056