Artículos relacionados a Medieval Calligraphy: Its History and Technique (Lettering,... 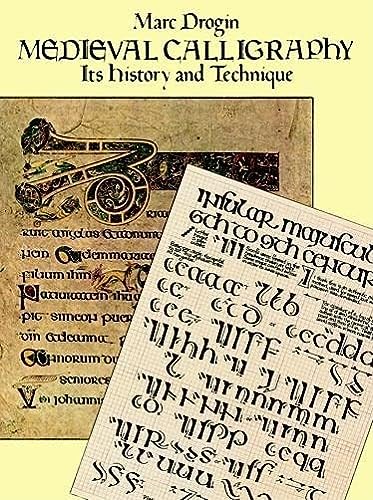 "Vastly rewarding and illuminating."—American Artist
This comprehensive history and instruction manual contains, in one volume, thirteen significant medieval scripts, with a history of the evolution of the alphabets, and fascinating background material on the scribes, their world, and how writing styles changed over a thousand years. Moreover, it is the only modern book that provides clearly described, brilliantly photographed, and accurately reproduced examples of both major and minor hands along with explicit directions for writing them.
The author—a professional calligrapher of medieval styles, as well as illuminator, writer, and teacher—presents a spirited historical account of thirteen important writing styles developed from about the fourth century to the end of the fifteenth. These include Roman Rustic, Uncial, Carolingian Minuscule, Early Gothic, Luxeuil Minuscule, Gothic Littera Bastarda , and seven other distinctive hands. The text explains how and why different styles evolved, why certain devices, codes, and abbreviations were used, and how form and function interacted.
In addition to fascinating facts about the origin and development of medieval scripts,Medieval Calligraphy also shows you how to duplicate medieval techniques with modern writing tools. Thorough instructions and sharply detailed, full-page photographs of the original alphabets explain pen angles and stroke sequences for each letter and capital. By carefully studying and practicing the techniques described, calligraphers will be able to master some of history's most interesting and influential scripts. Mr. Drogin has rounded out the book with helpful lists of suppliers of tools and materials, American and European sources for facsimiles and books, calligraphic societies, a bibliography, index, and more.
Unabridged, corrected Dover (1989) republication of the edition published by Allanheld, Osmun & Co., Publishers, Inc., and Abner Schram, Ltd., Montclair, New Jersey, 1980.

1. Medieval Calligraphy: Its History and Technique (Paperback or Softback)