Artículos relacionados a Anacreon Redivivus: A Study of Anacreontic Translation... 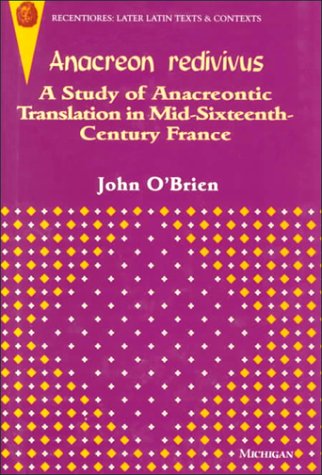 A study of the inspirations, themes, editions and influence of the Anacreontea, a collection of odes published in England in 1554 and falsely believed to be the work of the ancient Greek poet Anacreon.

In 1554 the scholar and printer Henri Estienne published what he believed to be the odes of the ancient Greek poet Anacreon. These odes, known today as the Anacreonta, were in fact pseudonymous publications. Yet such was the enduring popularity of these poems that when Francis Scott Key composed "The Star-Spangled Banner" he used the tune of a popular contemporary song, "To Anacreon in Heaven." In "Anacreon Redivivus," John O'Brien examines neo-Latin and vernacular translations of the "Anacreonta" in the French Renaissance during the two years following their publication. He deals with the context and theory of Renaissance translation before concentrating on the major Renaissance authors who found the Anacreonta attractive: Pierre de Ronsard and Remy Belleau, Henri Estienne and Elie Andri. This study emphasizes the interpenetration of vernacular and neo-Latin cultures in Renaissance France in terms of their shared literary techniques. O'Brien argues that these techniques created a literary Alexandrianism which was in turn perceived as characteristic of the "Anacreonta." The book shows how terms such as simplicity, lightness, and "mignardise" all contributed to the "identity" of pseudo-Anacreon, and it considers how translation played a role in this enterprise. The first detailed study of Anacreontic translation in Renaissance France, "Anacreon Redivivus" will interest students and scholars in modern languages, classics, and comparative literature. John O'Brien is Lecturer in French, University of Liverpool.