Artículos relacionados a The Gallant Cause: Canadians in the Spanish Civil War...

Zuehlke, Mark The Gallant Cause: Canadians in the Spanish Civil War 1936-1939 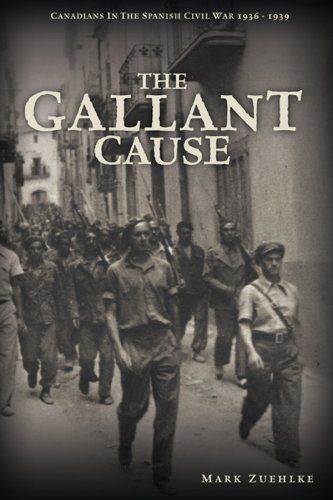 At the outbreak of the Spanish Civil War on July 17, 1936, forty-two thousand Internationals, comprised of Canadians, Americans, and Spaniards, fought together on the side of the Republicans who were trying to throw back fascist dictator General Franco's troops, which included countless German and Italian soldiers. By October 29, 1938 though, only two thousand Internationals were able to gather for a speech requesting them to withdraw. Despite all their efforts, Spain wanted to continue on its own, hoping the war would become a Spanish affair once again. Drawing on diaries and newly documented sources, Zuehlke offers a compelling account of the Canadian experience in Spain. It was not a popular war for Canada, with even the prime minister praising Hitler for his social and economic advances. Most world powers were aligning themselves with Italy and Germany, who supported Franco's movement. Along with allied troops, some 1,500 Canadians joined together in a valiant but doomed cause. This is the story of these brave Canadians, who like all veterans of war, deserve to have their story told and their experiences related, so that they will not be forgotten.

Mark Zuehlke (Victoria, BC) is the author of six critically acclaimed works on the Canadian army in World War II. He has a reputation for bringing the story of young Canadians at war vividly to life. Holding Juno: Canada's Heroic Defence of the D-Day Beaches, June 7, 1944 won the 2006 City of Victoria Butler Book Prize. Juno Beach, Canada's D-Day Victory, June 6, 1944 was on the shortlist for this prize the year before.

Descripción Wiley, 2007. Condición: Good. A+ Customer service! Satisfaction Guaranteed! Book is in Used-Good condition. Pages and cover are clean and intact. Used items may not include supplementary materials such as CDs or access codes. May show signs of minor shelf wear and contain limited notes and highlighting. Nş de ref. del artículo: 0470839260-2-4