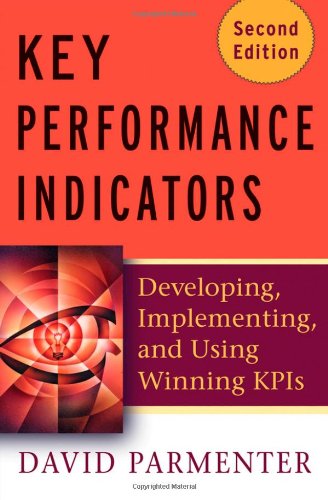 '( Parmenter)..draws on his previous research and experience to compile a series of 'how-to' guide-lines for performance improvement implementation for senior managers .' (Accountancy Ireland, August 2010).

An in-depth look at how to create and use key performance indicators (KPIs), from the King of KPIs -- now updated and expanded! By exploring measures that have transformed businesses, David Parmenter has developed a methodology that is breathtaking in its simplicity and yet profound in its impact. Now in an updated and expanded Second Edition, Key Performance Indicators is a proactive guide representing a significant shift in the way KPIs are developed and used, with an abundance of implementation tools, including: * The four foundation stones that lead the development and use of KPIs * A 12-step model for developing and using KPIs with guidelines * A KPI resource kit including worksheets, workshop programs, and questionnaires * A new and pragmatic approach to finding critical success factors * Over 300 performance measures * Implementation variations for small to medium enterprises and not-for-profit organizations * New implementation short cuts * How to brainstorm performance measures * Templates for reporting performance measures * A resource kit for a consultant who is acting as a coach / facilitator to the in-house project team Now including a discussion of critical success factors, as well as new chapters that focus on implementations issues and 'how to sections' on finding your CSFs and brainstorming the performance measures that report progress within the CSFs, Key Performance Indicators, Second Edition will help you identify and track your organization's KPIs to ensure continued and increased success.