Artículos relacionados a Flight: My Life in Mision Control

Flight: My Life in Mision Control 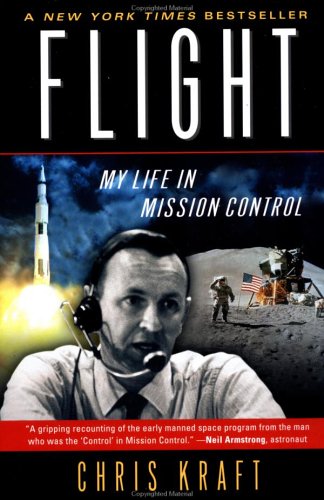 In his New York Times bestseller, Chris Kraft delivers an unforgettable account of his life in Mission Control. The first NASA flight director, Kraft emerged from boyhood in small-town America to become a visionary who played an integral role in what would become the National Aeronautics and Space Administration. It's all here, from the legendary Mercury missions that first sent Americans into space through the Gemini and Apollo missions that landed them on the moon. The great heroes of space are here, too-Alan Shepard, John Glenn, Neil Armstrong, Jim Lovell, and Buzz Aldrin-leading the space race that would change the course of U.S. history.

From NASA's infancy to its greatest triumphs . . . from the calculated gambles to the near disasters to the pure luck that accompanied each mission, Flight relives the spellbinding events that captured the imagination of the world. It is a stirring tribute to the U.S. space program and to the men who risked their lives to take America on a flight into the unknown-from the man who was there for it all.

"A rewarding look at the brief, shining moment when space pathfinders held sway over space warriors." (The Washington Post)

Chris Kraft was the director of the NASA Lyndon B. Johnson Space Center in Houston, Texas, from 1972 to 1982. Since his retirement from federal service, he has served as an aerospace consultant to Rockwell International, IBM, and other companies.

1. Flight: My Life in Mission Control

2. Flight: My Life in Mission Control

5. Flight: My Life in Mission Control