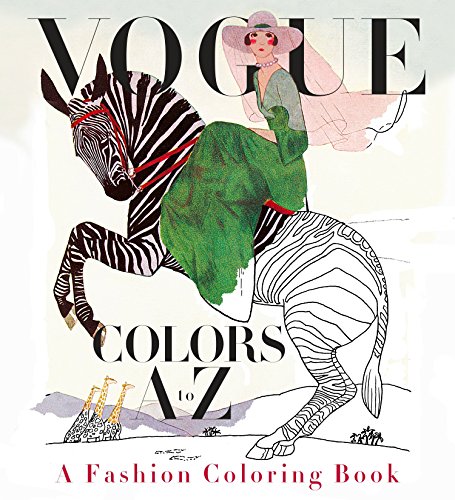 This first-ever coloring book from American Vogue is the perfect gift for fashion lovers.

Twenty-six archival magazine covers from 1912 to 1932, by ten celebrated illustrators living here and abroad, take you back to a more playful and whimsical moment of boas, bows, hats and headpieces, fans, pearls and gloves, and even exotic animals. Coloring book fans of all ages can try their hand at the Art Deco patterns and letters from A to Z and the lively drawings of women dressed for the task at hand, whether it is driving their own car, pruning morning glories in the garden, feeding a dragon, steering a gondola, sitting on a crescent moon, perched on a peacock or riding a zebra—side-saddle, of course. This is the Vogue woman as liberated, stylish, and always dressed for adventure.

At the back, don't miss the twenty-six Vogue covers in their original colors with lively captions as well as a stunning six-page gatefold of twenty-one glamorous dresses from 1912–1932 to color, tear out, and display.

VALERIE STEIKER, the editor of this book, is the culture editor at Vogue and the author of The Leopard Hat: A Daughter's Story and the editor, with Chris Knutsen, of a collection of essays, Brooklyn Was Mine. The ten illustrators are: from America, Helen Dryden, Harriet Meserole, Rita Senger, E.M.A Steinmetz, Arthur Gavin Finley, and George Wolfe Plank; from France, Georges Lepape, Pierre Mourgue, André Marty; and from Spain, Eduardo García Benito. Most of them were born in the 1880s or '90s; some, even the Americans, studied at the École des Beaux-Arts in Paris; one—George Wolfe Plank—was self taught; and Arthur Gavin Finley also moonlighted as a magician, called Henry Gavin, credited with the invention of the Tent Vanish Trick.

1. Vogue Colors A to Z: A Fashion Coloring Book (KNOPF)

2. Vogue Colors A to Z: A Fashion Coloring Book

3. Vogue Colors A to Z: A Fashion Coloring Book

4. Vogue Colors A to Z: A Fashion Coloring Book