Artículos relacionados a Death of a Salesman (Hereford Plays)

Death of a Salesman (Hereford Plays) 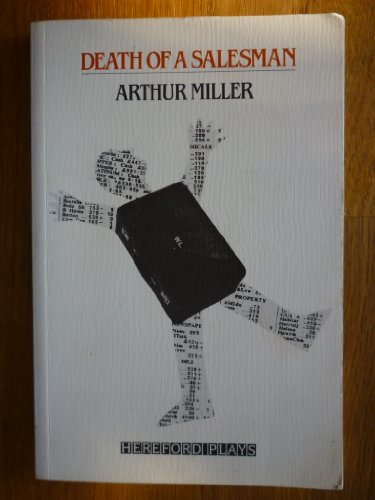 One of a series presenting a wide choice of 20th-century drama. The books offer scene-by-scene analysis, structured questions and assignment suggestions for GCSE. This play is based on the story of Willy Loman who, at 60, is bewildered by the failure and futility of his life.

1. Death of a Salesman (Hereford Plays)

Descripción The Viking Critical Library Text and Criticism / Viking, 1968, 1968. Paperback. Condición: Good. The book has been read but remains in clean condition. All pages are intact and the cover is intact. Some minor wear to the spine. Nş de ref. del artículo: GOR004121734

2. Death of a Salesman

Descripción Pearson Education, 1968. Paperback. Condición: Good. First edition, second printing. Shows some signs of wear, and may have some markings on the inside. Nş de ref. del artículo: 536730-6

3. DEATH OF A SALESMAN (HEREFORD PLAYS)

4. DEATH OF A SALESMAN

5. Death of a Salesman (Hereford Plays)

Descripción Heinemann Educational Publishers, London, 1968. Soft cover. Condición: Near Fine. 1st Edition. Synopsis: Death of a salesman is a play written by Arthur Miller (1915- ). The play focuses on how Willy Loman, the main character always thinks and talks about being successful. Being successful is Willy's great dream. Just like the American dream. Willy strives to bring happiness to himself and his family, but does not succeed. He is too prideful to accept the fact that his dream of being a successful salesman never will become true, and he is too prideful to accept where he fits in society. People like Willy are very common in today's society. They are caught up in the American dream; everybody wants to be successful, but only a few make it to the top. But is this really the most important values in life? Willy looks at himself as a failure, just because he didn't make it to the top in business life, well, that is how business is; not everybody can make it to the top. That doesn't necessarily mean that your whole life is over. That is what happened to Willy; when he felt like a failure because of his broken dream, he let it out on his wife, and his two sons, Biff and Happy. Then he killed himself. This shows that Willy's only values in life were to become wee-liked and successful and if he didn't, it wasn't worth living. I think the book was a bit difficult to read, because the play shifts between present and past, which makes it a bit confusing. All over, I liked the book, not because the story was so good, but because after finishing it, it made me think about how much people think about their career, and how often the career becomes a first priority, no matter what. Is it the career that makes a man successful? Review: Arthur Miller's 1949 Death of a Salesman has sold 11 million copies, and Willy Loman didn't make all those sales on a smile and a shoeshine. This play is the genuine article--it's got the goods on the human condition, all packed into a day in the life of one self-deluded, self-promoting, self-defeating soul. It's a sturdy bridge between kitchen-sink realism and spectral abstraction, the facts of particular hard times and universal themes. As Christopher Bigsby's mildly interesting afterword in this 50th-anniversary edition points out (as does Miller in his memoir, Timebends), Willy is closely based on the playwright's sad, absurd salesman uncle, Manny. But of course Miller made Manny into Everyman, and gave him the name of the crime commissioner Lohmann in Fritz Lang's angst-ridden 1932 Nazi parable, The Testament of Dr. Mabuse. The tragedy of Loman the all-American dreamer and loser works eternally, on the page as on the stage. A lot of plays made history around 1949, but none have stepped out of history into the classic canon as Salesman has. Great as it was, Tennessee Williams's work can't be revived as vividly as this play still is, all over the world. (This edition has edifying pictures of Lee J. Cobb's 1949 and Brian Dennehy's 1999 performances.) It connects Aristotle, The Great Gatsby, On the Waterfront, David Mamet, and the archetypal American movie antihero. It even transcends its author's tragic flaw of pious preachiness (which undoes his snoozy The Crucible, unfortunately his most-produced play). Nş de ref. del artículo: 001152