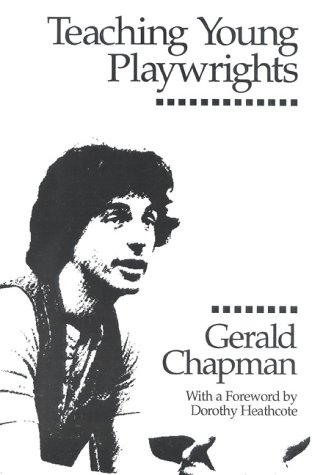 Teaching Young Playwrights is a book for all teachers of writing, regardless of their theatrical experience. This book is the result of Gerald Chapman's work with the Dramatists Guild New Playwrights Festival and workshops he and his colleagues conducted with children aged nine to eighteen.

Born and educated in England, GERALD CHAPMAN began his involvement with play production at Cambridge University. In London, he was appointed to the Royal Court Theatre in charge of the Young Peoples Theatre Scheme and the Young Writers Festival. He taught school, ran workshops, and organized the Young Playwrights annual competition. In 1980 Chapman was invited by Stephen Sondheim to start a similar project in the United States. He founded and directed New Yorks Young Playwrights Festival, which won a Drama Critics Circle Award in 1983. He also taught at New York University, worked in the New York City schools, and directed productions at the American Repertory Theatre, the Circle Repertory Company, and the Double Image Theatre. Gerald Chapmen died in September, 1987.