Artículos relacionados a The Wisdom of Psychopaths

Dutton, Kevin The Wisdom of Psychopaths

The Wisdom of Psychopaths 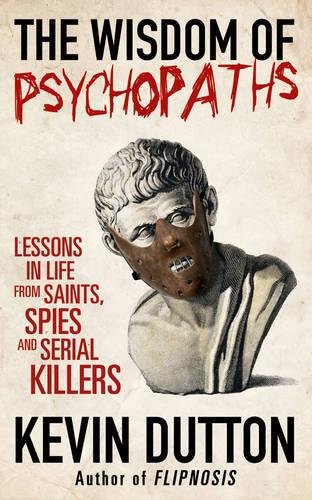 "Dutton tackles an elusive, important and much neglected aspect of the mind; our personality. He presents some highly original insights and does so in a provocative and humorous style" (V. S. Ramachandran, Gifford lecturer , Reith lecturer and author of The Tell-Tale Brain)

"The Wisdom of Psychopaths is a surprising, absorbing, and perceptive book set out in briskly readable prose and with gripping anecdotes. I found it altogether fascinating." (Philip Pullman)

"Dutton has written a masterful, readable, and entertaining treatise on psychopathy and its manifestations in everyday life. Some of his ideas will generate debate and controversy, but he clearly has provided a thought-provoking book for those seeking to understand the "psychopathic" world in which they live." (Robert Hare, PhD)

"Inspiring and revelatory. Dutton’s book gave me a real insight into who I really am." (Andy McNab)

"[W]onderfully entertaining... it beautifully depicts why psychopaths are the way they are on both a neurological and psychological level. Ultimately it's about understanding them and Dutton does an amazing job illustrating their inner workings. I don't think I have ever read a book that so skilfully blends a serious topic with an adventurous streak, especially when he undergoes a "psychopath make-over". Fast-paced, fun and smart, this is for everyone who wants to know more about what makes psychopaths tick! In short: An intriguing and captivating work about the psychopath's mind!" (The Book Garden)

Psychopath. No sooner is the word out than images of murderers, rapists, suicide bombers and gangsters flash across our minds.

But unlike their box-office counterparts, not all psychopaths are violent, or even criminal. Far from it. In fact, they have a lot of good things going for them. Psychopaths are fearless, confident, charismatic, ruthless and focused - qualities tailor-made for success in twenty-first century society.

In this groundbreaking adventure into the world of psychopaths, renowned psychologist Kevin Dutton reveals that there is a 'scale of madness' along which we all sit. Incorporating the latest advances in brain scanning and neuroscience, he shows that there is a fine line separating a brilliant surgeon and a serial killer, illustrating the spectrum of psychopathy with some insightful and startling case studies.

The Wisdom of Psychopaths is an intellectual rollercoaster ride that combines original scientific research with bold on-the-ground reporting from secret monasteries, Special Forces training camps and rarefied psychopath wings of maximum-security hospitals. Provocative, engaging and surprising at every turn, The Wisdom of Psychopaths reveals a shocking truth: beneath the hype and the popular characterisation, psychopaths have something to teach us.

1. The Wisdom of Psychopaths

Descripción Paperback. Condición: Very Good. The book has been read, but is in excellent condition. Pages are intact and not marred by notes or highlighting. The spine remains undamaged. Nş de ref. del artículo: GOR004497969

2. The Wisdom of Psychopaths

3. The Wisdom of Psychopaths Kevin Dutton

4. The Wisdom of Psychopaths Kevin Dutton

5. The Wisdom of Psychopaths

6. The Wisdom of Psychopaths

Descripción William Heinemann, 2012. Condición: Good. 0th Edition. Ships from the UK. Former Library book. Shows some signs of wear, and may have some markings on the inside. Nş de ref. del artículo: GRP79135829

7. The Wisdom of Psychopaths