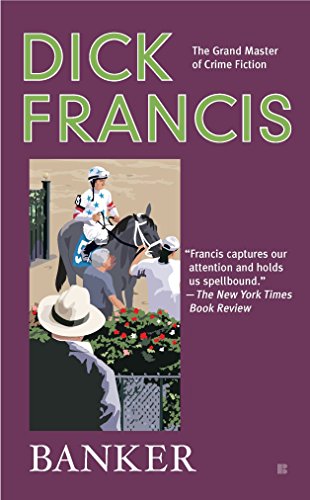 Investment banker Tim Ekaterin thought arranging the purchase of a champion racehorse was a sure thing-but he never gambled on getting caught up in murder.

Dick Francis (pictured with his son Felix Francis) was born in South Wales in 1920. He was a young rider of distinction winning awards and trophies at horse shows throughout the United Kingdom. At the outbreak of World War II he joined the Royal Air Force as a pilot, flying fighter and bomber aircraft including the Spitfire and Lancaster.

He became one of the most successful postwar steeplechase jockeys, winning more than 350 races and riding for Her Majesty Queen Elizabeth, the Queen Mother. After his retirement from the saddle in 1957, he published an autobiography, The Sport of Queens, before going on to write more than forty acclaimed books, including the New York Times bestsellers Even Money and Silks.

A three-time Edgar Award winner, he also received the prestigious Crime Writers' Association's Cartier Diamond Dagger, was named Grand Master by the Mystery Writers of America, and was awarded a CBE in the Queen's Birthday Honours List in 2000. He died in February 2010, at age eighty-nine, and remains among the greatest thriller writers of all time.

Descripción Penguin Putnam Inc, United States, 2010. Paperback. Condición: New. Reprint. Language: English. Brand new Book. An investment banker arranges the purchase of a champion racehorse and gets caught up in murder in this New York Times bestseller that's "fraught with violence, conspiracy and, of course, horses" (The Boston Globe).Tim Ekaterin raised millions of dollars to finance the purchase of Sandcastle, a champion racer, only to discover an apparent defect in the horse. Investigating further, Ekaterin learns that the business of investment banking is nothing compared to the cutthroat world of horseracing-a world where violence and murder only raise the stakes. "The most elaborate plot Francis has yet devised."-The Washington Post Book World"The es with all the breathless pace we have come to expect of this superb writer."-The New York Times Book Review. Nş de ref. del artículo: ABZ9780425237755

Descripción G.P. Putnam's Sons, 2010. Mass Market Paperback. Condición: New. Mass Market Paperback. Investment banker Tim Ekaterin thought arranging the purchase of a champion racehorse was a sure thing-but he never gambled on getting caught up in murder. When young investmen.Shipping may be from multiple locations in the US or from the UK, depending on stock availability. 308 pages. 0.136. Nş de ref. del artículo: 9780425237755