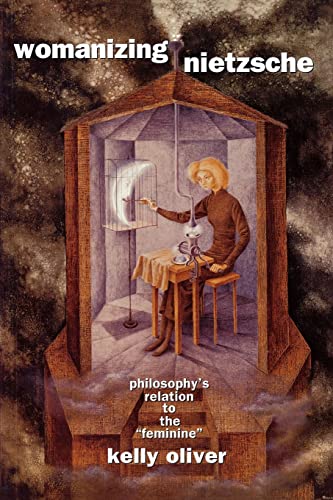 "Kelly Oliver has produced a powerful reading of the complex and commonly unrecognized investments that even philosophers who challenge the very limits of philosophy--Nietzsche, Derrida, Lacan--have in the containment and exclusion of women, femininity and maternity. . . . This book is an example of the best that feminist theory and philosophy have to offer each other." -Elizabeth Grosz, Monash University "Who is Nietzsche and who will he have been--the last and most outrageous in a line of misogynistic philosophers since Plato or the thinker who opens the possibility for a genuine critique of essentializing conceptions of gender and of the debilitating fetishism of a narrow conception of reason? "Womanizing Nietzsche puts the reader into the midst of the intense and sophisticated discussion of these questions that has raged since the appearance of Jacques Derrida's "Spurs. . . . In articulating these themes Kelly Oliver brings to bear a comprehensive and systematic perspective on the work of Derrida, Irigaray, Kristeva and those writing in their wake." -Gary Shapiro, University of Richmond

In Womanizing Nietzsche, Kelly Oliver uses an analysis of the position of woman in Nietzsche's texts to open onto the larger question of philosophy's relation to the feminine and the maternal. Offering readings from Nietzsche, Derrida, Irigaray, Kristeva, Freud and Lacan, Oliver builds an innovative foundation for an ontology of intersubjective relationships that suggests a new approach to ethics.

10. Womanizing Nietzsche: French Readings of the Figure of Woman