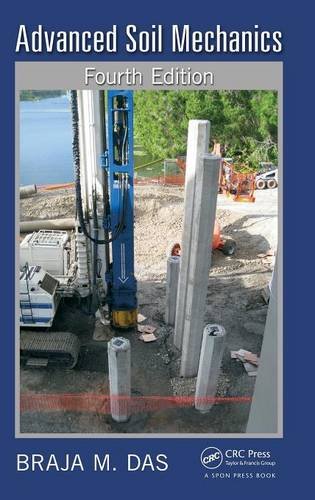 "The concepts have been explained in lucid manner which is of great value to students at undergraduate and postgraduate levels. It is a true asset for faculty and the research workers."
―Dr. Priti Maheshwari, Indian Institute of Technology Roorkee

What’s New in the Fourth Edition:

The fourth edition further examines the relationships between the maximum and minimum void ratios of granular soils and adds the American Association of State Highway and Transportation Officials (AASHTO) soil classification system. It summarizes soil compaction procedures and Proctor compaction tests. It introduces new sections on vertical stress due to a line load of finite length, vertical stress in Westergaard material due to point load, line load of finite length, circularly loaded area, and rectangularly loaded area. The text discusses the fundamental concepts of compaction of clay soil for the construction of clay liners in waste disposal sites as they relate to permeability and adds new empirical correlations for overconsolidation ratio and compression index for clay soils. It provides additional information on the components affecting friction angle of granular soils, drained failure envelopes, and secant residual friction angles of clay and clay shale.

The author adds new correlations between field vane shear strength, preconsolidation pressure, and overconsolidation ratio of clay soils. He also revises and expands information on elastic settlement of shallow foundations, adds a precompression with sand grains, and presents the parameters required for the calculation of stress at the interface of a three-layered flexible system.

An ideal resource for beginning graduate students, the fourth edition of Advanced Soil Mechanics further develops the basic concepts taught in undergraduate study by presenting a solid foundation of the fundamentals of soil mechanics.

This book is suitable for students taking an introductory graduate course, and it can also be used as a reference for practicing professionals.