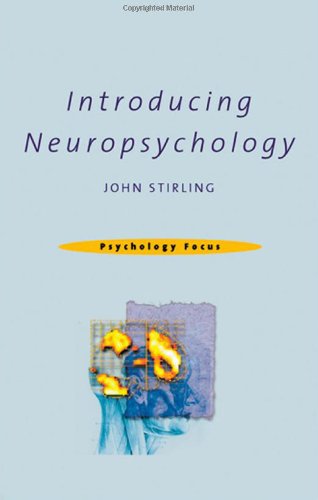 Introducing Neuropsychology investigates the functions of the brain and explores the relationships between brain systems and human behaviour. It draws on both established findings and cutting edge research. The material is presented in a jargon-free, easy to understand manner and aims to guide students new to the field through current areas of research. John Stirling's Introducing Neuropsychology not only covers brain function but gives clinical examples of what happens when this function is damaged.

The text deals firstly with the basics of neuropsychology, discussing the structures of the central nervous system and methods of research used in neuropsychology. The book covers sensory function, the lateral nature of the brain and motor control and movement disorders. The author then looks at higher order cortical functions, with chapters on language, memory and amnesia, visual object recognition and spatial processing and attention. A further chapter covers executive function and describes some psychiatric disorders resulting from dysfunction.

With over 80 illustrations John Stirling has provided a user-friendly textbook, which will be essential reading for those studying neuropsychology within the disciplines of psychology, medicine, clinical psychology and neuroscience.

John Stirling has worked at Manchester Polytechnic/MMU for over 30 years, teaching Bio and Neuropsychology, Psychopathology and Experimental Design and Statistics. He was a Fulbright visiting professor to California State University in 1992/3, and was seconded by MMU from 2002-2005 to undertake research work with Rebecca Elliott and colleagues in the Neuroscience and Psychiatry Unit at Manchester University. He has published over 30 scientific journal articles, and three books.

Rebecca Elliott obtained her first degree from the University of Cambridge in 1990 and a PhD in Neuropsychology from the same institution in 1996. She worked as a postdoctoral research fellow at the Wellcome Department of Cognitive Neuroscience in London for 3 years, before taking a lectureship in the Neuroscience and Psychiatry Unit at Manchester University in 1999. She has published over 50 scientific journal articles and book chapters.