Artículos relacionados a Figures of Thought: Mathematics and Mathematical Texts 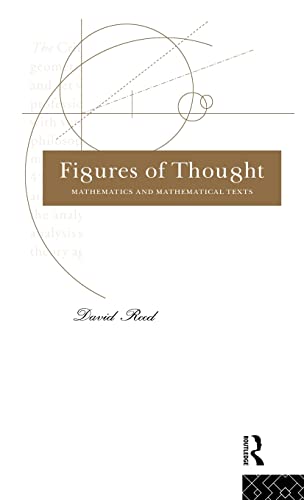 ""Figures of Thought is quite simply a wonderful book. An enormous amount of work has gone into it. The result is the sort of textbook which every philosopher of mathematics would like to have on their reference shelf." -Stuart G. Shanker, York University

Descripción Taylor & Francis Ltd, United Kingdom, 1995. Hardback. Condición: New. Language: English. Brand new Book. Rarely has the history or philosophy of mathematics been written about by mathematicians, and the analysis of mathematical texts themselves has been an area almost entirely unexplored. Figures of Thought looks at ways in which mathematical works can be read as texts, examines their textual strategies and demonstrates that such readings provide a rich source of philosophical issues regarding mathematics: issues which traditional approaches to the history and philosophy of mathematics have neglected. David Reed, a professional mathematician himself, offers the first sustained and critical attempt to find a consistent argument or narrative thread in mathematical texts. In doing so he develops new and fascinating interpretations of mathematicians' work throughout history, from an in-depth analysis of Euclid's Elements, to the mathematics of Descartes and right up to the work of contemporary mathematicians such as Grothendeick. He also traces the implications of this approach to the understanding of the history and development of mathematics. Nş de ref. del artículo: LHB9780415081467