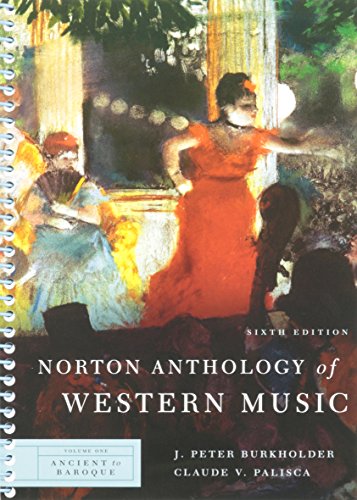 J. Peter Burkholder is Distinguished Professor of Musicology at Indiana University. He has written and edited four books on Charles Ives, as well as numerous articles on topics spanning from the Middle Ages to the twentieth century for The New Grove Dictionary of Music and Musicians, Journal of the American Musicological Society, Journal of Musicology, Musical Quarterly, 19th-Century Music, Music Theory Spectrum, and other journals. He has served as President, Vice President, and Director-at-Large of the American Musicological Society and on the board of the College Music Society. His writings have received awards from the American Musicological Society, the Society for American Music, and ASCAP. Claude V. Palisca, late professor of music at Yale University, began his collaboration on A History of Western Music with the Third Edition. Among his many publications are a history of Baroque music and a collection of scholarly essays on Italian Renaissance music.