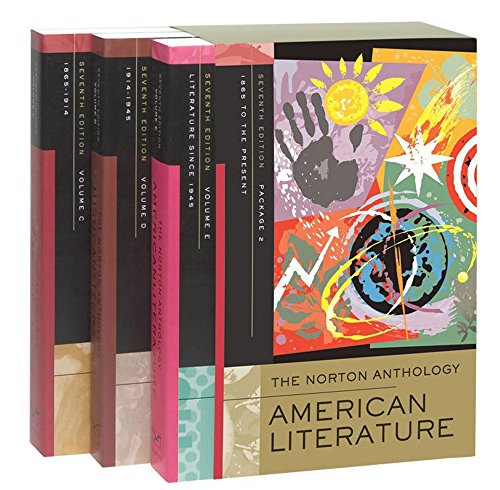 This classic survey of American literature from its sixteenth-century origins to its flourishing present features the work of over 260 writers, with 34 newly included. Among the 36 works reproduced in their entirety are "Franklin's Autobiography"; "The Scarlet Letter"; "Walden"; "Adventures of Huckleberry Finn"; "The Awakening"; "My Antonia"; "As I Lay Dying"; "A Streetcar Named Desire"; "Quicksand"; ""Howl" and Glengarry Glen Ross". This edition pays increased attention to cultural contexts through the inclusion of 45 colour plates, 12 contextual clusters, updated maps and timelines, and through extensively revised section introductions, headnotes, footnotes and bibliographies.

Nina Baym (Ph.D. Harvard) is Swanlund Endowed Chair and Center for Advanced Study Professor Emerita of English and Jubilee Professor of Liberal Arts and Sciences at the University of Illinois at Urbana-Champaign. She is the author of The Shape of Hawthorne's Career; Woman's Fiction: A Guide to Novels by and About Women in America, 1820-1870; Novels, Readers, and Reviewers: Responses to Fiction in Antebellum America; American Women Writers and the Work of History, 1790-1860; American Women of Letters and the Nineteenth-Century Sciences and most recently, Women Writers of the American West, 1833-1927. Some of her essays are collected in Feminism and American Literary History; she has also edited and introduced many reissues of work by earlier American women writers, from Judith Sargent Murray through Kate Chopin. In 2000 she received the MLA's Hubbell Medal for lifetime achievement in American literary studies. Jerome Klinkowitz (Ph.D. Wisconsin), is University Distinguished Scholar and Professor of English at the University of Northern Iowa. He is the author or editor of over forty books in postwar culture and literature, among them, Structuring the Void: The Struggle for Subject in Contemporary American Fiction; Kurt Vonnegut's America; Literary Disruptions: The Making of a Post-Contemporary American Fiction; and The Practice of Fiction in America: Writers from Hawthorne to the Present. Arnold Krupat (Ph.D. Columbia) is Professor of Literature at Sarah Lawrence College. He is the author of, among other books, Ethnocriticism: Ethnography, History, Literature; Red Matters: Native American Studies; and, most recently, All That Remains: Varieties of Indigenous Expression (2009). He is the editor of a number of anthologies, including Native American Autobiography: An Anthology and New Voices in Native American Literary Criticism. With Brian Swann, he edited Here First: Autobiographical Essays by Native American Writers, which won the Wordcraft Circle of Native Writers and Storytellers Award for best book of nonfiction prose in 2001. Mary Loeffelholz (Ph.D. Yale) is Professor of English and Vice Provost for Academic Affairs at Northeastern University. She is the author of Dickinson and the Boundaries of Feminist Theory; Experimental Lives: Women and Literature, 1900-1945; and, most recently, From School to Salon: Reading Nineteenth-Century American Women's Poetry. With Martha Nell Smith, she edited the Blackwell Companion to Emily Dickinson. Her essays have appeared in such journals as American Literary History, English Literary History, the Yale Journal of Criticism, and Modern Language Quarterly. Jeanne Campbell Reesman (Ph.D. University of Pennsylvania) is Ashbel Smith Professor of English at the University of Texas at San Antonio. She is author of Houses of Pride: Jack London's Race Lives, Jack London: A Study of the Short Fiction, and American Designs: The Late Novels of James and Faulkner, and editor of Speaking the Other Self: American Women Writers, and Trickster Lives: Culture and Myth in American Fiction. With Wilfred Guerin et al. she is co-author of A Handbook of Critical Approaches to Literature and with Earle Labor of Jack London: Revised Edition. With Kenneth Brandt she is co-editor of MLA Approaches to Teaching Jack London, with Leonard Cassuto Rereading Jack London, with Dale Walker No Mentor but Myself: Jack London on Writing and Writers, and with Sara S. Hodson Jack London: One Hundred Years a Writer. She and No l Mauberret are co-editors of a series of 25 new Jack London editions in French published by ditions Ph bus of Paris. She is presently at work on two books: Mark Twain Versus God: The Story of a Relationship, and, with Sara S. Hodson, The Photography of Jack London. She is a member of the Executive Board of the American Literature Association and founder and Executive Coordinator of the Jack London Society. Patricia B. Wallace (Ph.D. Iowa) is Professor of English at Vassar College. She is a contributing editor of The Columbia History of American Poetry; her essays and poems have appeared in such journals as The Kenyon Review, The Sewanee Review, MELUS and PEN America. She has been a recipient of fellowships from the NEA, the Mellon Foundation, and the ACLS.