Artículos relacionados a Norton Anthology of American Literature, Volume A:...

Norton Anthology of American Literature, Volume A: Beginnings to 1820: Beginning to 1820 v. A

Norton Anthology of American Literature, Volume A: Beginnings to 1820: Beginning to 1820 v. A 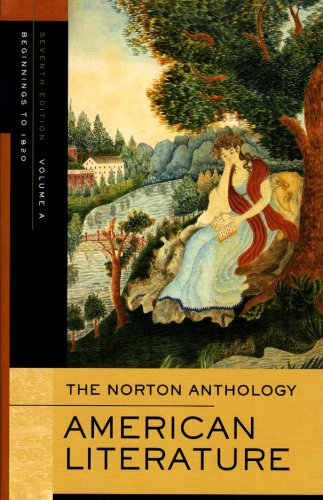 This classic survey of American literature from its sixteenth-century origins to its flourishing present features the work of over 260 writers, with 34 newly included. Among the 36 works reproduced in their entirety are "Franklin's Autobiography"; "The Scarlet Letter"; "Walden"; "Adventures of Huckleberry Finn"; "The Awakening"; "My Antonia"; "As I Lay Dying"; "A Streetcar Named Desire"; "Quicksand"; ""Howl" and Glengarry Glen Ross". This edition pays increased attention to cultural contexts through the inclusion of 45 colour plates, 12 contextual clusters, updated maps and timelines, and through extensively revised section introductions, headnotes, footnotes and bibliographies.

Nina Baym (Ph.D. Harvard) is Swanlund Endowed Chair and Center for Advanced Study Professor Emerita of English and Jubilee Professor of Liberal Arts and Sciences at the University of Illinois at Urbana-Champaign. She is the author of The Shape of Hawthorne's Career; Woman's Fiction: A Guide to Novels by and About Women in America, 1820-1870; Novels, Readers, and Reviewers: Responses to Fiction in Antebellum America; American Women Writers and the Work of History, 1790-1860; American Women of Letters and the Nineteenth-Century Sciences and most recently, Women Writers of the American West, 1833-1927. Some of her essays are collected in Feminism and American Literary History; she has also edited and introduced many reissues of work by earlier American women writers, from Judith Sargent Murray through Kate Chopin. In 2000 she received the MLA's Hubbell Medal for lifetime achievement in American literary studies. Wayne Franklin (Ph.D. University of Pittsburgh) is Professor and Head of English, University of Connecticut. He is the author of James Fenimore Cooper: The Early Years (the first volume of his definitive biography, from Yale University Press), The New World of James Fenimore Cooper, and Discoverers, Explorers, Settlers: The Diligent Writers of Early America. He is the editor of American Voices, American Lives: A Documentary Reader and The Selected Writings of Thomas Jefferson, A Norton Critical Edition, and co-editor, with Michael Steiner, of Mapping American Culture. Philip F. Gura (Ph.D. Harvard) is William S. Newman Distinguished Professor of American Literature and Culture and Adjunct Professor of Religious Studies at the University of North Carolina at Chapel Hill. He is the author of many books, including The Wisdom of Words: Language, Theology, and Literature in the New England Renaissance; A Glimpse of Sion's Glory: Puritan Radicalism in New England, 1620-1660; Jonathan Edwards, America's Evangelical; and American Transcendentalism: A History. For ten years he was editor of the journal Early American Literature. He is an elected member of the Society of American Historians, the Massachusetts Historical Society, the American Antiquarian Society, and the Colonial Society of Massachusetts. Arnold Krupat (Ph.D. Columbia) is Professor of Literature at Sarah Lawrence College. He is the author of, among other books, Ethnocriticism: Ethnography, History, Literature; Red Matters: Native American Studies; and, most recently, All That Remains: Varieties of Indigenous Expression (2009). He is the editor of a number of anthologies, including Native American Autobiography: An Anthology and New Voices in Native American Literary Criticism. With Brian Swann, he edited Here First: Autobiographical Essays by Native American Writers, which won the Wordcraft Circle of Native Writers and Storytellers Award for best book of nonfiction prose in 2001.

1. The Norton Anthology of American Literature, Vol. A: Beginnings to 1820

2. The Norton Anthology of American Literature, Vol. A: Beginnings to 1820

4. THE NORTON ANTHOLOGY OF AMERICAN

5. The Norton Anthology of American Literature (Seventh Edition) (Vol. A)