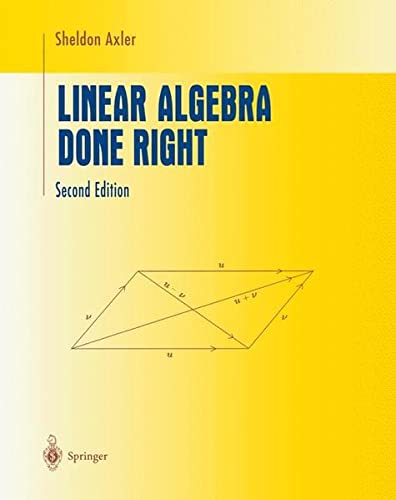 "This second edition of an almost determinant-free, none the less remarkably far-reaching and didactically masterly undergraduate text on linear algebra has undergone some substantial improvements. First of all, the sections on selfadjoint operators, normal operators, and the spectral theorem have been rewritten, methodically rearranged, and thus evidently simplified. Secondly, the section on orthogonal projections on inner-product spaces has been extended by taking up the application to minimization problems in geometry and analysis. Furthermore, several proofs have been simplified, and incidentally made more general and elegant (e.g., the proof of the trigonalizability of operators on finite-dimensional complex vector spaces, or the proof of the existence of a Jordan normal form for a nilpotent operator). Finally, apart from many other minor improvements and corrections throughout the entire text, several new examples and new exercises have been worked in. However, no mitigation has been granted to determinants. Altogether, with the present second edition of his text, the author has succeeded to make this an even better book."

AMERICAN MATHEMATICAL MONTHLY
"The determinant-free proofs are elegant and intuitive."

CHOICE
"Every discipline of higher mathematics evinces the profound importance of linear algebra in some way, either for the power derived from its techniques or the inspiration offered by its concepts. Axler demotes determinants (usually quite a central technique in the finite dimensional setting, though marginal in infinite dimensions) to a minor role. To so consistently do without determinants constitutes a tour de forces in the service of simplicity and clarity; these are also well served by the general precision of Axler’s prose. Students with a view towards applied mathematics, analysis, or operator theory will be well served. The most original linear algebra book to appear in years, it certainly belongs in every undergraduate library."

ZENTRALBLATT MATH
"Altogether, the text is a didactic masterpiece."

From the reviews of the second edition:

"The most original linear algebra book to appear in years, it certainly belongs in every undergraduate library."—CHOICE

“This book can be thought of as a very pure-math version of linear algebra ... . it focuses on linear operators, primarily in finite-dimensional spaces ... . Axler has come up with some very slick proofs of things that ... makes the book interesting for mathematicians. The book is also very clearly written and fairly leisurely. ... Axler concentrates on the properties of linear operators, and doesn’t introduce other concepts unless they’re really necessary.” (Allen Stenger, The Mathematical Association of America, December, 2010)

This text for a second course in linear algebra, aimed at math majors and graduates, adopts a novel approach by banishing determinants to the end of the book and focusing on understanding the structure of linear operators on vector spaces. The author has taken unusual care to motivate concepts and to simplify proofs. For example, the book presents - without having defined determinants - a clean proof that every linear operator on a finite-dimensional complex vector space has an eigenvalue. The book starts by discussing vector spaces, linear independence, span, basics, and dimension. Students are introduced to inner-product spaces in the first half of the book and shortly thereafter to the finite- dimensional spectral theorem. A variety of interesting exercises in each chapter helps students understand and manipulate the objects of linear algebra. This second edition features new chapters on diagonal matrices, on linear functionals and adjoints, and on the spectral theorem; some sections, such as those on self-adjoint and normal operators, have been entirely rewritten; and hundreds of minor improvements have been made throughout the text.