ArtÚculos relacionados a Don't Put Me In, Coach: My Incredible NCAA Journey... 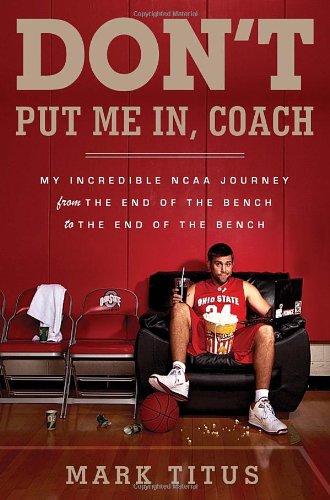 An irreverent, hilarious insider's look at big-time NCAA basketball, through the eyes of the nation's most famous benchwarmer and author of the popular blog ClubTrillion.com (3.6m visits!). Mark Titus holds the Ohio State record for career wins, and made it to the 2007 national championship game. You would think Titus would be all over the highlight reels. You'd be wrong.

In 2006, Mark Titus arrived on Ohio State's campus as a former high school basketball player who aspired to be an orthopedic surgeon. Somehow, he was added to the elite Buckeye basketball team, given a scholarship, and played alongside seven future NBA players on his way to setting the record for most individual career wins in Ohio State history. Think that's impressive? In four years, he scored a grand total of nine—yes, nine—points.

This book will give readers an uncensored and uproarious look inside an elite NCAA basketball program from Titus's unique perspective. In his four years at the end of the bench, Mark founded his wildly popular blog Club Trillion, became a hero to all guys picked last, and even got scouted by the Harlem Globetrotters. Mark Titus is not your average basketball star. This is a wild and completely true story of the most unlikely career in college basketball. A must-read for all fans of March Madness and college sports!

MARK TITUS's blog, http://clubtrillion.blogspot.com, has recorded over 3.6 million views since its debut in late 2008. He has been featured in the New York Times, ESPN.com, Yahoo.com, the Associated Press, and the Cleveland Plain Dealer. He has recently attempted to enter the NBA draft and tried out for the Harlem Globetrotters. Titus graduated from Ohio State in 2010, a hero to millions.