Artículos relacionados a Street Vegan: Recipes and Dispatches from The Cinnamon... 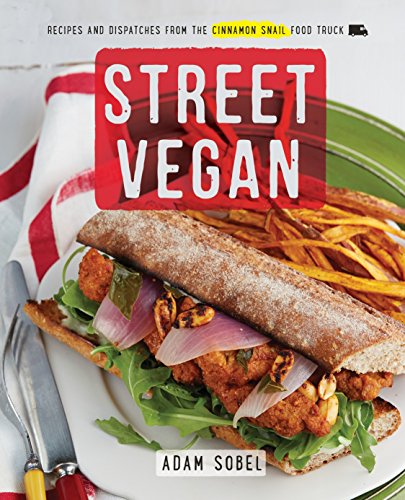 "I've never loved waiting in line so much. You always know at the end of it there's gonna be seitan, doughnuts, and laughs. And now we don't even have to wait--we can make those killer sandwiches in our own homes!" --Isa Chandra Moskowitz, author of Isa Does It

"As a classically trained chef and omnivore, I've always known that vegan food is healthy--but the enduring question for me was whether it can be delicious. If Adam Sobel is the chef, the answer is yes. In Street Vegan, he explodes the stereotype that vegan food is one-dimensional, with recipes that are cosmopolitan, thoughtful, and helpful to anyone stuck in the same-ten-dishes rut." --Sara Moulton, host of the public television show Sara's Weeknight Meals Reseńa del editor:

Meatless meals revamped by the Cinnamon Snail, the vegan food truck with a cult following.

What's the secret behind the Cinnamon Snail's takeover of New York City streets? In all kinds of weather, vegetarians, vegans, and omnivores alike queue up for addictive vegan cuisine from truck owner Adam Sobel. Now Adam brings his food straight to your kitchen, along with stories of the challenges of working on a food truck while still finding ways to infuse food with imagination, love, and a pinch of perspective. Street Vegan brings the energy and passion of the Cinnamon Snail's creative cooking from truck to table, including:

5. Street Vegan: Recipes and Dispatches from The Cinnamon Snail Food Truck: A Cookbook

9. Street Vegan: Recipes and Dispatches from The Cinnamon Snail Food Truck: A Cookbook