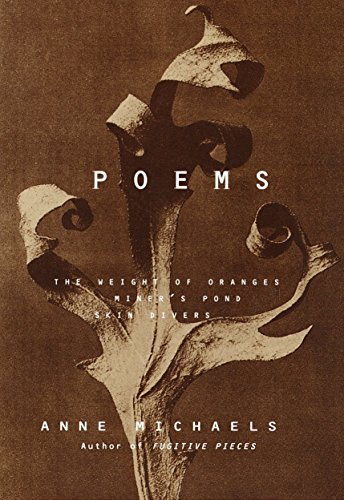 The award-winning Canadian poet-novelist and author of Fugitive Pieces presents a stunning compilation of her poetry, including works from three previously published collections--The Weight of Oranges, Miner's Pond, and Skin Divers--in an anthology that incorporates rich narrative works, along with poems about painters and poets.

stunning first novel, Fugitive Pieces, Anne Michaels had already won awards and critical acclaim for two books of poetry: The Weight of Oranges (1986), which won the Commonwealth Prize for the Americas, and Miner's Pond (1991), which received the Canadian Authors Association Award and was short-listed for the Governor General's Award and the Trillium Award. Although they were published separately, these two books, along with Skin Divers, a collection of Michaels's newest work, were written as companion volumes.

Poems brings all three books together for the first time, creating for American readers a wonderful introduction to Anne Michaels's poetry. Meditative and insightful, powerful and heart-moving, these are poems that, as Michael Ondaatje has written, "go way beyond games or fashion or politics . . . They represent the human being entire."

Descripción Paperback. Condición: New. 1st. Paperback. Prior to her stunning first novel, Fugitive Pieces , Anne Michaels had already won awards and critical acclaim for two books of poetry: The Weight of Oranges (1986), which won the Commonwe.Shipping may be from multiple locations in the US or from the UK, depending on stock availability. 208 pages. 0.272. Nş de ref. del artículo: 9780375702259