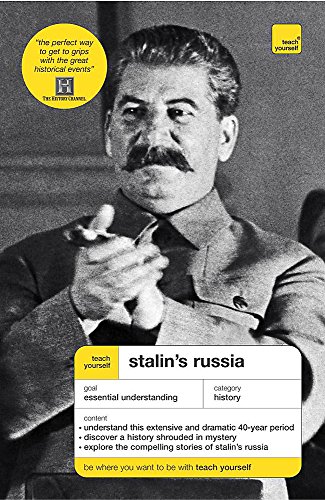 This book will give you a full understanding Russia from the beginning of the twentieth century through to the Cold War. Follow the life, policies, and ideology of Joseph Stalin learn the background of blood and revolution behind Russia's rise to the status of superpower. It considers the conditions into which the infamous dictator was born and grew up; the state of the Russian people, the shadows of Tsarism, the revolutionary tradition and the legacy of Lenin. With a clear understanding of this background, the reader is able to comprehend Stalin's rise to supremacy - the power struggle between Stalin and Trotsky and the many factors that enabled Stalin to become the sole command. The horrific effects of Stalin's five year plans that demanded collectivization and de-Kulakization are objectively considered and brought to life by anecdotes and personal details. So too are the instruments of terror and tyranny, the political purges and Stalin's foreign policy, which forced Russia into the largest and most costly war in history. The aftermath of the Second World War is addressed in light of the ensuing Cold War, how the Soviet Union became a nuclear power and the intensification of tensions between the East and West. Such an extensive, shocking and dramatic history is told with engaging objectivity that will arouse the reader's interest and compassion.

David Evans is an established writer and lecturer. He has also been a soldier in the army and a headmaster. He has written over 20 books covering aspects of modern European history and contributed to numerous television and radio programmes.

Descripción Paperback. Condición: Very Good. The book has been read, but is in excellent condition. Pages are intact and not marred by notes or highlighting. The spine remains undamaged. Nş de ref. del artículo: GOR002747553

Descripción Paperback. Condición: Good. The book has been read but remains in clean condition. All pages are intact and the cover is intact. Some minor wear to the spine. Nş de ref. del artículo: GOR003549622

Descripción Teach Yourself, 2005. Paperback. Condición: Used; Good. **SHIPPED FROM UK** We believe you will be completely satisfied with our quick and reliable service. All orders are dispatched as swiftly as possible! Buy with confidence!. Nş de ref. del artículo: mon0000834155