Artículos relacionados a Picture This Century: Introduction to Twentieth Century... 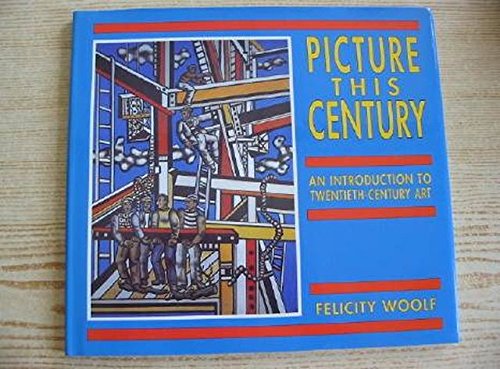 In this introduction to 20th-century Western art, the author discusses the most influential art movements, such as Fauvism, Cubism and Abstract Expressionism and also shows how certain subjects, for example industry, war and the role of women in society, have preoccupied many artists this century. The author explains how to interpret and appreciate a variety of works of art, including examples of sculpture and photography, as well as paintings. Famous painters such as Picasso and Matisse are represented alongside living artists such as Sonia Boyce and Leon Golub. The author also wrote "Bodylines: The Human Figure in Art" and "Myths and Legends: Paintings in the National Gallery".

Descripción Hodder Children's Books, 1992. Hardcover. Condición: GOOD. Spine creases, wear to binding and pages from reading. May contain limited notes, underlining or highlighting that does affect the text. Possible ex library copy, will have the markings and stickers associated from the library. Accessories such as CD, codes, toys, may not be included. Nş de ref. del artículo: 3179859244

Descripción Hodder Childrens Books, 1992. Hardcover. Condición: Used; Good. Dispatched, from the UK, within 48 hours of ordering. This book is in good condition but will show signs of previous ownership. Please expect some creasing to the spine and/or minor damage to the cover. Nş de ref. del artículo: CHL6146148

Descripción Hodder Children's Books 17/09/1992, 1992. Condición: Very Good. This book is in very good condition and will be shipped within 24 hours of ordering. The cover may have some limited signs of wear but the pages are clean, intact and the spine remains undamaged. This book has clearly been well maintained and looked after thus far. Money back guarantee if you are not satisfied. See all our books here, order more than 1 book and get discounted shipping. . Nş de ref. del artículo: 7719-9780340548677

Descripción Hodder Children's Books 17/09/1992, 1992. Condición: Very Good. Shipped within 24 hours from our UK warehouse. Clean, undamaged book with no damage to pages and minimal wear to the cover. Spine still tight, in very good condition. Remember if you are not happy, you are covered by our 100% money back guarantee. Nş de ref. del artículo: 6545-9780340548677