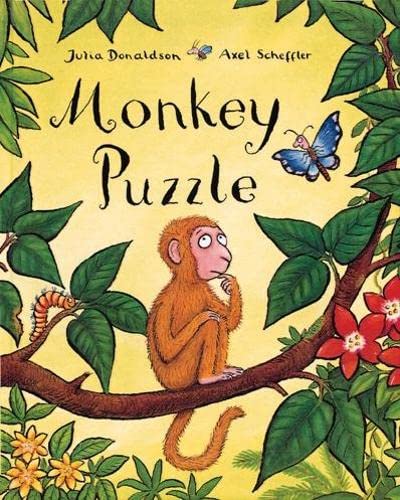 Can butterfly help little monkey find his mum? Yes, finally, but only after a lot of trial and error as butterfly misunderstands monkey’s descriptions and leads him to all sorts of unsuitable animals.

Reseþa del editor:
Can butterfly help little monkey find his mum? Yes, finally, but only after a lot of trial and error as butterfly misunderstands monkey's descriptions and leads him to all sorts of unsuitable animals. Monkey Puzzle is a charming jungle tale with the hallmark rhyming text of Julia Donaldson and lively illustrations of Axel Scheffler, creators of The Gruffalo.
BiografÚa del autor:
Julia Donaldson is the outrageously talented, prize-winning author of the world's best-loved picture books, and was the 2011-2013 UK Children's Laureate. Her books include Room on the Broom, What the Ladybird Heard and the modern classic The Gruffalo, which has sold over 13.5 million copies worldwide and has been translated into over sixty languages. Julia also writes fiction as well as poems, plays and songs and her brilliant live children's shows are always in demand. Julia and her husband Malcolm divide their time between Sussex and Edinburgh. Axel Scheffler is a star illustrator whose instantly recognisable, warm and witty illustrations have achieved worldwide acclaim and numerous awards. In addition to his picture books, Axel is the illustrator of wonderful novelty and gift books for Macmillan, such as the bestselling The Bedtime Bear, The Tickle Book and Mother Goose's Nursery Rhymes. He also illustrates the popular Pip and Posy series. Born in Hamburg, Axel now lives with his family in London.