ArtÚculos relacionados a The Reluctant Tommy: An Extraordinary Memoir of the...

The Reluctant Tommy: An Extraordinary Memoir of the First World War 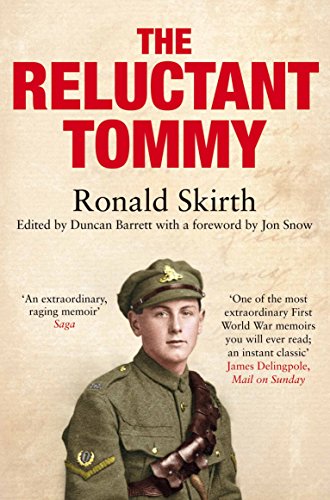 In the First World War, Ronald Skirth was an ordinary tommy. His experiences were like those of many others, save in one thing. When Skirth went out into No Man's Land after Passchendaele and saw the dead body of a teenaged German soldier, he resolved that he would never again help to take a human life. Making use of Ronald Skirth's letters and postcards to his sweetheart, Ella, his contemporary journals and the memoir he wrote in his retirement fifty years later, The Reluctant Tommy is the fascinating story of a man who stuck by his principles in impossible circumstances. With a foreword from Jon Snow, and now repackaged for paperback, it is an new classic of the war memoir genre; the tale of an ordinary soldier with a truly remarkable story. `Different from the hundreds of other memoirs about the Great War ...What he has to say was hard come by and should be heard' Daily Mail `Superb' Daily Telegraph `An important contribution to the literature of the war ... whenever I get too misty-eyed about officer-man relationships I shall reread it to remind me of how badly things could go wrong.' Richard Holmes, Evening Standard

After the First World War, Ronald Skirth returned to England and married Ella. He became a teacher and, after he had retired, wrote his memoirs of the First World War. He died in 1977 and is survived by his daughter, Jean. Duncan Barrett is an editor and writer. He grew up in London and studied English at Jesus College, Cambridge.