Artículos relacionados a Elephants on Acid 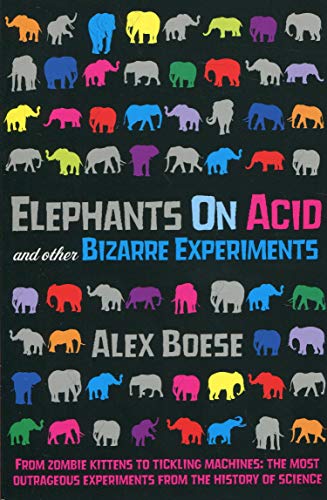 Have you ever wondered if a severed head retains consciousness long enough to see what happened to it? Or whether your dog would run to fetch help, if you fell down a disused mineshaft? And what would happen if you were to give an elephant the largest ever single dose of LSD? The chances are that someone, somewhere has conducted a scientific experiment to find out... 'Excellent accounts of some of the most important and interesting experiments in biology and psychology' Simon Singh If left to their own devices, would babies instinctively choose a well-balanced diet? Discover the secret of how to sleep on planes Which really tastes better in a blind tasting - Coke or Pepsi?

Alex Boese holds a master's degree in the history of science from the University of California, San Diego. He is the author of The Museum of Hoaxes and Hippo Eats Dwarf and the creator and curator of www.museumofhoaxes.com. He lives near San Diego.

1. Elephants on Acid: and Other Bizarre Experiments

2. Elephants on Acid: and Other Bizarre Experiments

4. Elephants on Acid: and Other Bizarre Experiments