The Dog Ate My Bus Pass (Pick a Poem) 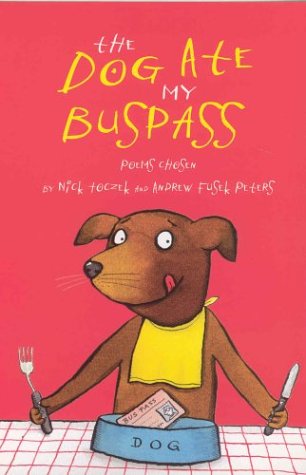 The Dog Ate My Bus Pass is a brilliant collection of hilarious poems featuring some of the world's most incredible excuses, apologies, tall stories and fibs. It is essential reading for all children (and some adults too!). from The Worst Excuses in the World, number 5 by Clare Bevan I'd only left it for two minutes while I built a scale model of Buckingham Palace out of cheese triangles, when a whole herd of angry wildebeest stampeded through our back garden, battered down the kitchen door, and before they vanished into the shimmering sunset, they trampled my book under their mighty, thundering hooves, and the dog ate it.

Nick Toczeck works as a poet, storyteller, journalist, lecturer, political researcher, novelist and stand-up comedian. His work has appeared in numerous anthologies, pamphlets, magazines, newspapers, and even school text books. He works extensively in schools, abroad as well as in the UK, and is a tireless self-publicist. Andrew Fusek Peters has spent fifteen years working as a performance poet, storyteller, author and didgeridoo player within education. He performs to large audiences and runs workshops with smaller audiences. With his wife, Polly, he has written and edited over thirty books for young people, many critically acclaimed.