Artículos relacionados a The Sands of Ammon: Sands of Amon (Alexander) 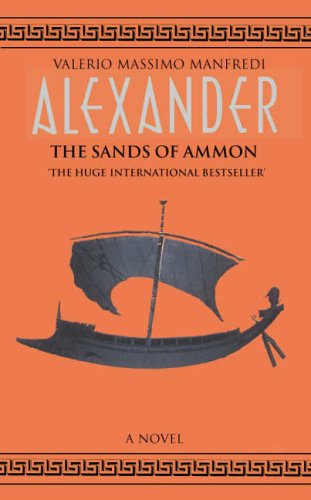 The Sands of Ammon brilliantly describes Alexander's quest to conquer Asia, the limitless domain ruled by the Great King of the Persians.In a seemingly impossible venture, Alexander and his men storm Persian fortresses and harbours, crippling King Daruis' domination of land and sea. Even the legendary Haliacarnassus is defeated by the Macedionan armies. Ruthlessly, Alexander's war machine moves ever onward taking him up into the snow-covered Anatolian highlands, and ever closer to his destiny. But there is much danger ahead. Despite the defeat of Daruis, the Island City of Tyre and the Towers of Gaza prove to be formidable obstacles. Undeterred, Alexander surges forth over land and sea to the mysterious land of Egypt And there, in the sands, lies the Oracle of Ammon, waiting to reveal an amazing truth to Alexander. One that will change his already amazing life

Valerio Massimo Manfredi is an archaeologist and scholar of the ancient Greek and Roman world. He is the author of numerous novels, which have won him literary awards and have sold 12 million copies. His Alexander trilogy has been translated into thirty-eight languages and published in sixty-two countries and the film rights have been acquired by Universal Pictures. His novel The Last Legion was made into a film starring Colin Firth and Ben Kingsley and directed by Doug Lefler. Valerio Massimo Manfredi has taught at a number of prestigious universities in Italy and abroad and has published numerous articles and essays in academic journals. He has also written screenplays for film and television, contributed to journalistic articles and conducted cultural programmes and television documentaries.