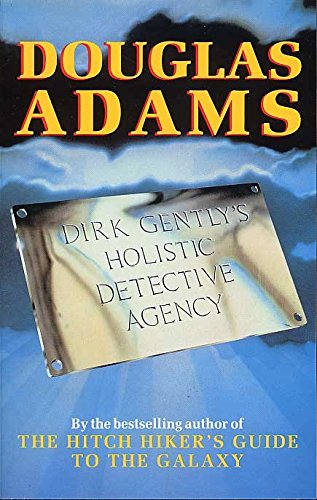 What do a dead cat, a computer whiz-kid, an Electric Monk who believes the world is pink, quantum mechanics, a Chronologist over 200 years old, Samuel Taylor Coleridge (poet), and pizza have in common? Apparently not much; until Dirk Gently, self-styled private investigator, sets out to prove the fundamental interconnectedness of all things by solving a mysterious murder, assisting a mysterious professor, unravelling a mysterious mystery, and eating a lot of pizza -- not to mention saving the entire human race from extinction along the way (at no extra charge). To find out more, read this book (better still, buy it, then read it) -- or contact Dirk Gently's Holistic Detective Agency. 'A thumping good detective-ghost-horror-whodunnit-time travel-romantic-musical-comedy epic.' The author

Douglas Adams created all the various and contradictory manifestations of The Hitchhikers Guide to the Galaxy: radio, novels, TV, computer game, stage adaptations, comic book and bath towel. He lectured and broadcast around the world and was a patron of the Dian Fossey Gorilla Fund and Save the Rhino International. Douglas Adams was born in Cambridge, UK and lived with his wife and daughter in Islington, London, before moving to Santa Barbara, California, where he died suddenly in 2001. After Douglas died the movie of Hitchhiker moved out of development hell into the clear uplands of production, using much of Douglas' original script and ideas. Douglas shares the writing credit for the movie with Karey Kirkpatrick.