Artículos relacionados a Interview With The Vampire: Claudia's Story (The...

Interview With The Vampire: Claudia's Story (The Vampire Chronicles) 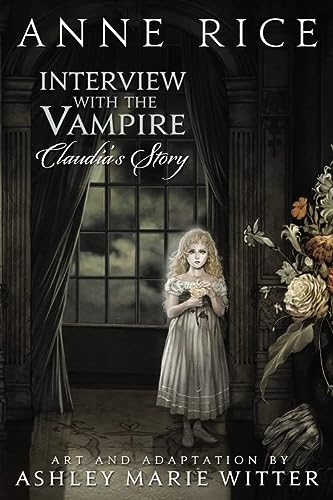 "Witter's art is delicate, with a baroque manga feel... Louis and Lestat's lovely faces come to life, collars are fluffed with detailed antique lace, and many bites are bitten. Most effectively drawn is young Claudia, flashing from innocent to monstrous by the panel."--io9.com

A richly-illustrated adaptation of Anne Rice's Interview with the Vampire, told through the eyes of the vampire Claudia, who was just a little girl when she was turned by the vampire Lestat. Though she spends many years of happiness with her two vampire fathers, she gradually grows discontent with their insistence upon treating her like a little girl, even though she has lived as long as any mortal man...and her lust to kill is certainly no less than theirs...

1. Interview With The Vampire: Claudia's Story

Descripción Yen Press, 2012. Hardcover. Condición: New. Estado de la sobrecubierta: New. 1st Edition. HAND SIGNED 0N THE TITLE PAGE by ANNE RICE. New and Unread Condition, a beautiful copy of this book. A First Edition, First Printing. The boards Are Clean, Not Bumped. Fore Edges Are Clean. Not Remaindered marked. Dust Jacket Is In Fine Condition. No Chipping, Crinkles, or tears. Not Price Clipped. DJ in protective Brodart Cover. Only opened at the original signing event 16 years ago and then lovingly boxed and stored until now - A PRISTINE COPY OF OF THIS TITLE. All books are boxed and shipped with bubble wrap - PHOTOS OF THE ACTUAL BOOK SENT UPON REQUEST. THIS IS AN INTRODUCTORY PRICE FOR OUR GRAND RE-OPENING. ALL PRICES WILL BE ADJUSTED IN APRIL TO REFLECT MARKET PRICES. Signed by Author(s). Nş de ref. del artículo: 000860

3. Interview With The Vampire: Claudia's Story