Artículos relacionados a The Brooklyn Follies 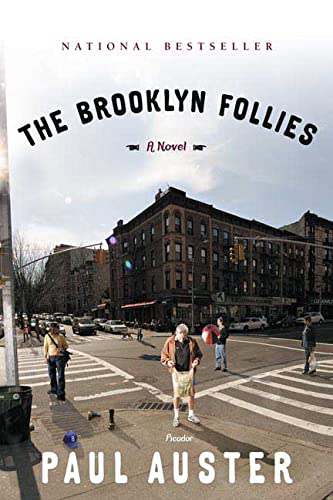 Nathan Glass has come to Brooklyn to die. Divorced, retired, estranged from his only daughter, the former life insurance salesman seeks only solitude and anonymity. Then Glass encounters his long-lost nephew, Tom Wood, who is working in a local bookstore--a far cry from the brilliant academic career Tom had begun when Nathan saw him last. Tom's boss is the colorful and charismatic Harry Brightman--a.k.a. Harry Dunkel--once the owner of a Chicago art gallery, whom fate has also brought to the "ancient kingdom of Brooklyn, New York." Through Tom and Harry, Nathan's world gradually broadens to include a new circle of acquaintances. He soon finds himself drawn into a scam involving a forged page of The Scarlet Letter, and begins to undertake his own literary venture, The Book of Human Folly, an account of "every blunder, every pratfall, every embarrassment, every idiocy, every foible, and every inane act I have committed during my long and checkered career as a man."

The Brooklyn Follies is Paul Auster's warmest, most exuberant novel, a moving, unforgettable hymn to the glories and mysteries of ordinary human life.

Paul Auster is the bestselling author of Oracle Night, The Book of Illusions, and Timbuktu. I Thought My Father Was God, the NPR National Story Project anthology, which he edited, was also a national bestseller. His work has been translated into thirty languages. He lives in Brooklyn, New York.

1. The Brooklyn Follies: A Novel

2. THE BROOKLYN FOLLIES: A NOVEL