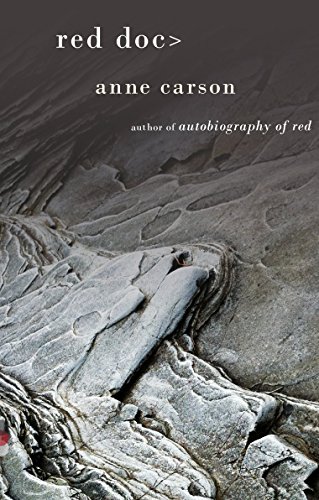 "A supraliterary, textually experimental landscape that only Carson could conjure. Ranging from frozen tundra to festive meadows, G's odyssey features his dying mother, his war-veteran road-buddy lover, and a female artist friend in a wild hybrid narrative pushed to mythopoetic glory." --Elle "Carson's lyrical language effortlessly lifts pure moments of hope and despair off the page. . . . Red Doc> stands on its own--and takes the reader on a singular journey of longing and grief." --San Francisco Chronicle "Carson's red-winged anti-hero is still the crown prince of erotic, melancholy foibles. . . . Whether she's talking war vets, flying cows, Latin etymology or Elvis, Carson once again blurs the lines of prose and poetry." --American Poet "Unexpected, dizzying.... Sure to be the verse event of the season." --Vogue.com

"[Carson's] phrases and images ... swoop and beguile like hidden messages. Cryptograms from other civilizations, or hoaxes perpetrated by pranksters by moonlight? Say what you will about Carson, she doesn't play it safe." --The New York Observer

"For every line of Carson's that's grave and pensive, another is funny, erotic, demotic, or dirty.... Even when the setting gets surreal, Carson never breaks faith with ordinary emotion. Red Doc> is, at times, excruciating in its grief. Yet just when it threatens to become unbearable, just when you are hurling at terminal velocity toward the killing earth--just then everything that seemed broken comes together. Suddenly you are borne into the sky on words and stories, those human wings, up there with a thousand ice bats and a kind-hearted monster and a stoner cow and a solid column of volcanic smoke, seamed with brilliant flame." --New York Magazine

"A shape-shifting verse novel that's both playful and compelling." --Time Out New York

"The events in Red Doc>, not so much recounted as erupting, have an instability suggestive of Alice in Wonderland.... As with a roller coaster, the transitions make us look forward to the next splendid plunge. And we plunge." --The Boston Globe

"Carson swings through a variety of techniques that refract the madness of war, from the systemic absurdism of Catch-22 to the post-modern flights of Gravity's Rainbow to the dead-bang temporal concussions of The Things They Carried.... Carson is funny--Lorrie Moore funny, Grace Paley funny--and Red Doc> courses with a wit shot through with intelligence and humility.... Brushed with the magical, the absurd and the surreal." --Paste

"Parts of this book are shockingly moving, especially when she describes the impending death of G's mother. The poetry around their final meeting is strangely haunting in an understated way. It presents loss and our tenuous human interconnectedness in its fragile and mysterious passing.... Inspired." --The Globe and Mail (Toronto) "Red Doc> is the sequel--sort of--to Autobiography of Red, one of the crossover classics of contemporary poetry. The book is strange and sweet and funny, and the remoteness of the ancient myth crossed with the familiarity of the modern setting creates a particularly Carsonian effect: the paradox of distant closeness." --The New York Times Magazine

"If there is one book I've pressed on more people in the past decade, it is Carson's Autobiography of Red. And I'm here to tell you its sequel has just been published, and that it's pretty much the biggest event of the year.... Red Doc> is insightful, whimsical, erotic and sad.... If you like books to provoke you, dare you, even change the way you think, let me recommend this strange, wonderful pair of novels about a young red man. We all have volcanoes in our lives. Sometimes it takes someone else to show us how to survive them." --Rosecrans Baldwin, NPR Reseńa del editor:

Some years ago I wrote a book about a boy named Geryon who was red and had wings and fell in love with Herakles. Recently I began to wonder what happened to them in later life. Red Doc> continues their adventures in a very different style and with changed names.

To live past the end of your myth is a perilous thing.

Descripción VINTAGE, United States, 2014. Paperback. Condición: New. Reprint. Language: English. Brand new Book. **New York Magazine's Top 10 Books of 2013****GoodReads Reader's Choice Award Winner** Some years ago I wrote a book about a boy named Geryon who was red and had wings and fell in love with Herakles. Recently I began to wonder what happened to them in later life. Red Doc> continues their adventures in a very different style and with changed names. To live past the end of your myth is a perilous thing. Nş de ref. del artículo: ABZ9780307950673

Descripción Paperback. Condición: New. Paperback. ** New York Magazine's Top 10 Books of 2013** **GoodReads Reader's Choice Award Winner** Some years ago I wrote a book about a boy named Geryon who was red and had wings and fell in love w.Shipping may be from multiple locations in the US or from the UK, depending on stock availability. 167 pages. 0.230. Nş de ref. del artículo: 9780307950673