ArtĒculos relacionados a The Road to Terror: Stalin and the Self-destruction...

Getty, J. Arch; Naumov, Oleg V. The Road to Terror: Stalin and the Self-destruction of the Bolsheviks, 1932-1939 (Annals of Communism)

The Road to Terror: Stalin and the Self-destruction of the Bolsheviks, 1932-1939 (Annals of Communism) 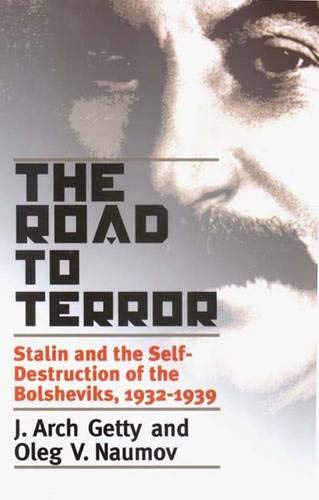 "A most illuminating work." Geoffrey A. Hosking, Times Literary Supplement "As an accumulation of fresh material on Stalinism, The Road to Terror has few equals." Robert Service, Evening Standard "This book is the first comprehensive study of the Great Terror of the 1930s based on previously top secret Soviet documents. It will be indispensable for all historians and researchers of communism, the USSR, and Stalinism for many decades to come." Roy A. Medvedev, author of Let History Judge "This book will be of great value to students of the Terror and the material, such as Bukharin's last letter, is astounding." Michael J. Ybarra, Wall Street Journal "A riveting and important work." Virginia Quarterly Review "The authors attempt to escape from the sterility of so much purge writing... This is an elegant and persuasive thesis." Chris Ward, American Historical Review

This gripping book assembles and translates into English for the first time top secret Soviet documents from 1932 to 1939, the era of Stalin's purges. The nearly 200 documents, including dossiers, police reports, private letters and secret transcripts, expose the hidden inner workings of the Communist Party and the dark inhumanity of the purge process.