Artículos relacionados a Theater of the Avant-garde 1890-1950: A Critical Anthology 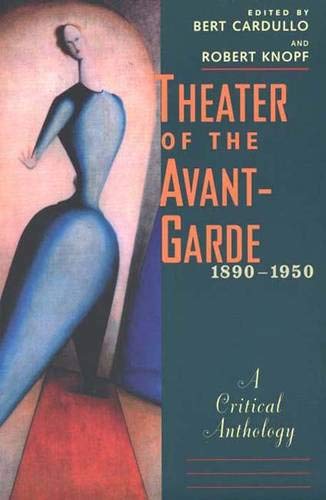 "An original and valuable contribution to the literature of the avant-garde that should be of great use to students and lovers of the theatre." Daniel Gerould, CUNY Graduate Center"

This critical anthology of avant-garde drama offers comprehensive coverage of that distinctively twentieth-century tradition. It includes the full texts of sixteen important plays, each preceded by a historical-critical introduction and followed by an essay, often written by the playwright, that elaborates on the dramatic and aesthetic issues raised by the play. Cardullo and Knopf, in making plays and documents of the avant-garde available in one collection for the first time, underscore the place and importance of the movement. In a provocative general introduction to the book, Bert Cardullo traces the history of the avant-garde tradition and argues for a revisionist history of modern drama that would acknowledge the innovative contributions of the avant-garde. The anthology, which presents examples of French and Russian Symbolism, Italian Futurism, German Expressionism, and Dada-Surrealism, as well as work by such seminal figures as Jarry, Strindberg, Artaud, and Kandinsky, illuminates the astonishing daring of these writers from many Western countries and diverse theatrical movements.