Artículos relacionados a Britain Since 1918: The Strange Career Of British Democracy

Marquand, David Britain Since 1918: The Strange Career Of British Democracy

Britain Since 1918: The Strange Career Of British Democracy 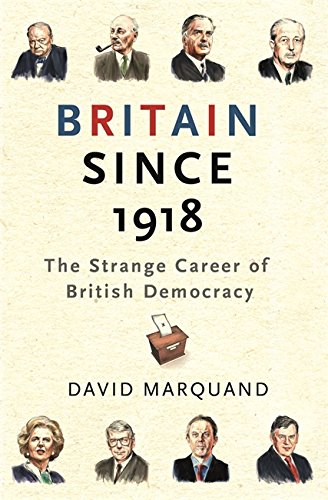 Críticas:
a glittering masterpiece which will illuminate debate for many years to come. (Kenneth O Morgan THE INDEPENDENT)

few will fail to enjoy this book: always elegant, often incisive, it is a genuine masterpiece of political history (Dominic Sandbrook DAILY TELEGRAPH)

there is only one great democratic republican of the 20th century, and one for whose efforts we should all be grateful: David Marquand (Richard Reeves NEW STATESMAN)

Beautifully written and bursting with insight as well as historical fact.. a joy to read (Roy Hattersley THE GUARDIAN)

his style has verve, his insights are plentiful and this book is a testament to the breadth of his reading (Robert Taylor TRIBUNE)

The history of democratic politics in Britain since the coming of universal male suffrage in 1918 is a dramatic one, crowded with events and colourful figures. As well as the great events of war and economic crises, and the quieter drama of constitutional change, this era has been studded with democratic protests of every sort: from the General Strike and the hunger marches of the 1930s, anti-Suez rallies and CND marches in the 1950s, student, feminist and green protests in the 1960s and seventies, the miners' strike and poll tax clashes of the 1980s, and the anti-Iraq War marches of the early twenty-first century.

The story opens more than 350 years ago. The Levellers of the 17th century, 18th-century radicals, the Chartists and the Reform Acts are all part of the unsteady and fiercely contested progress towards a democratic constitution. Dreams, visions and ideals are important too - of George Orwell, and Enoch Powell, Milton, Thomas Paine and Edmund Burke, Churchill and Lord Salisbury, Aneurin Bevan and Tony Benn - for they have also shaped our outlook.

BRITAIN SINCE 1918 is a formidable combination of narrative and analsysis: entertaining, instructive and thought-provoking.