Artículos relacionados a The Essential Boswell: Selections from the Writings...

The Essential Boswell: Selections from the Writings of James Boswell

The Essential Boswell: Selections from the Writings of James Boswell 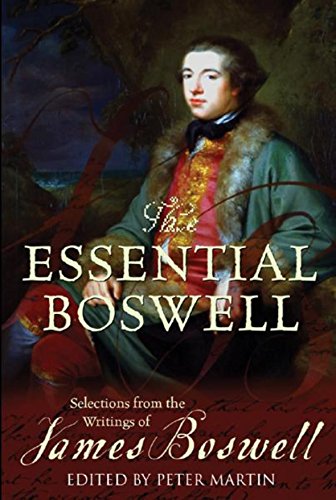 '... enthralling deathbed conversations with David Hume and Lord Kames, and a similarly riveting set of interviews with Jean-Jacques Rousseau... the selection is as tantalising as it is enjoyable.' (THE HERALD (GLASGOW) )

'[Peter Martin] introduces it with a useful short biography of Boswell, and gives us extracts from his journal, his correspondence, and many other writings... Among the delights is Boswell's report of his conversations with Rousseau... We get closer to Boswell in his articles on hypochondria... they are touching descriptions of an affliction with which many are familiar. Our sympathy is tempered by the evidence that he was a lecher, a braggart, a bore and a bad husband.' (THE CATHOLIC HERALD )

Anthology by leading Boswell biographer - now working on a life of Samuel Johnson - of the best of Boswell's diaries, his account of the great Cham himself, Sam Johnson, and an account of his time in Corsica as well as his obsession with hypochondria. In addition to material about Johnson and their celebrated tour to the Hebrides the lesser known 'An Account of Corsica', records his audacious visit to meet the fabled rebel leader Pasquale Paoli. In modern parlance it was an international bestseller of its day. Martin's astute selection, as in all the best anthologies, will undoubtedly lead the reader to Boswell's work, showing that, as Boswell said of himself: 'I am a compositoion of an infinite variety of ingredients.'