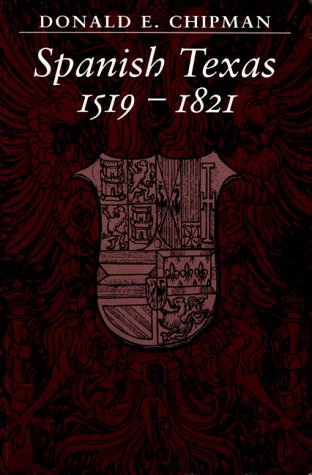 Modern Texas, like Mexico to the south, traces its beginning to sixteenth-century encounters between Spaniards, Native American peoples, and a vast land unexplored by Europeans. Unlike Mexico, however, Texas eventually received the stamp of Anglo-American culture, so that Spanish contributions to present-day Texas tend to be obscured or even unknown. In this pathfinding study, Donald E. Chipman draws on archival and secondary sources to write the story of Spain's three-hundred-year presence and continuing influence in the land that has become Texas.

Chipman begins with the first European sighting of Texas shores in 1519. He goes on to chronicle the exploits of Cabeza de Vaca, Francisco Vázquez de Coronado, Luis Moscoso and other sixteenth-century explorers, before devoting extensive attention to the eighteenth century, a time of active Spanish colonization.

Although Mexican independence ended the Spanish era in 1821, Chipman finds that Spain has left a substantial legacy in modern Texas. Spanish precedents have shaped modern Texas law in the areas of judicial procedure, land and water law, and family law. Spanish influences abound in Texas art, architecture, music, and theater, not to mention the widely spoken Spanish language. And the Roman Catholic religion introduced by the Spaniards continues to have many adherents in Texas.

In short, the rich history of Spain in Texas deserves to be widely known by "Texana buffs" and professional historians alike, and Spanish Texas, 1519-1821 is the one-volume source to consult.