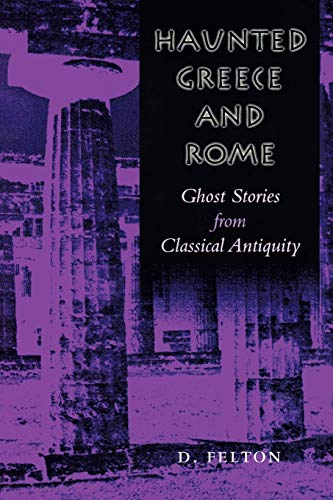 "In the decade since its publication, D. Felton's brief book has deservedly acquired the status of a minor classic. It is an accessible, well-written and engaging exposition and analysis of a trio of versions of a deeply traditional ghost-story from the Graeco-Roman world." * Journal of Scientific Exploration *

Stories of ghostly spirits who return to this world to warn of danger, to prophesy, to take revenge, to request proper burial, or to comfort the living fascinated people in ancient times just as they do today. In this innovative, interdisciplinary study, the author combines a modern folkloric perspective with literary analysis of ghost stories from classical antiquity to shed new light on the stories' folk roots. The author begins by examining ancient Greek and Roman beliefs about death and the departed and the various kinds of ghost stories which arose from these beliefs. She then focuses on the longer stories of Plautus, Pliny, and Lucian, which concern haunted houses. Her analysis illuminates the oral and literary transmission and adaptation of folkloric motifs and the development of the ghost story as a literary form. In her concluding chapter, the author also traces the influence of ancient ghost stories on modern ghost story writers, a topic that will interest all readers and scholars of tales of hauntings.

Descripción University of Texas Press. Paperback / softback. Condición: New. New copy - Usually dispatched within 4 working days. Combines a modern folkloric perspective with literary analysis of ghost stories from classical antiquity to shed light on the stories, and folk roots. This book examines ancient Greek and Roman beliefs about death and the departed and the various kinds of ghost stories that arose from these beliefs. Nş de ref. del artículo: B9780292725089