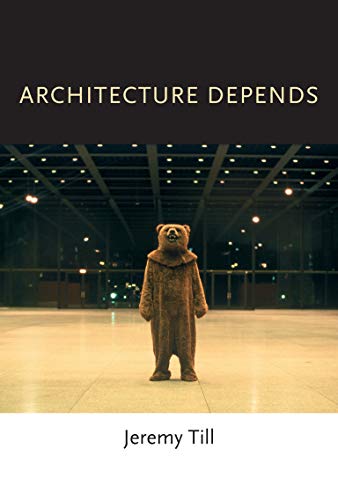 Book by Till Jeremy

Boldly and elegantly, Architecture Depends asserts that architecture is absolutely dependent upon the 'contingent', difficult and perverse factors that architects have long tried to ignore in an effort to be pure, self-important and professional...What Till's book achieves is to set out with great clarity the territory in which the debate around future action must take place. -Robert Mull , Architects' Journal Architecture Depends is an attempt to save the profession from itself and a manifesto for an architecture that acknowledges its relationship with the world and its duty to others...This is a brave, enjoyable, affirming and important book and I actually felt sad to have finished it. -Flora Samuel, Times Higher Education (Book of the Week) The book performs a wonderful contextualizing function, making architectural intervention, from idea to event, depend on the wide range of human habits and spheres of influence that we normally sum up as 'the world'. -Lucas Freeman, Scapegoat Thought-provoking and important...Architecture Depends raises the question of the relationship of architecture and life to a new level. -Anni Vartola, Arkkitehti (Finland) Till's book is about the world he knows and how one conveys ideas behind architecture. It is a superbly written, frequently fascinating set of arguments that will support architects who wish to use the messy stuff of life for their own advantage. -Tim Abrahams , Blueprint

Descripción Paperback. Condición: New. Paperback. Polemics and reflections on how to bridge the gap between what architecture actually is and what architects want it to be.Architecture depends-on what? On people, time, politics, ethics, m.Shipping may be from multiple locations in the US or from the UK, depending on stock availability. 254 pages. 0.408. Nş de ref. del artículo: 9780262518789