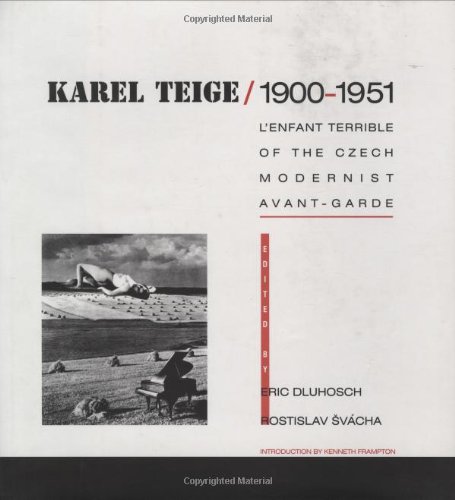 "Tiege was at one and the same time both an agent provocateur and seismograph, at once provoking action and debate and yet simultaneously reacting with the utmost sensitivity to the shifting political spectrum of his time." -- from the introduction by Kenneth Frampton Karel Teige (1900--1951), a leading figure of the avant-garde of the 1920s and 1930s, participated in every important argument and controversy of those turbulent years. He edited the most influential avant-garde journals on Czech and international cultural affairs and wrote profoundly original essays and books on the theory and criticism of art and architecture. He also produced paintings, collages, photomontages, film scripts, book covers, and typefaces and participated in theatrical performances. When the Communists took over Czechoslovakia in 1948, Teige was first hailed as a progressive, then denounced for not toeing the party line -- even though he was never a card-carrying member of the Communist Party. He died a broken man, forbidden to speak out or to publish. Since the recovery of his work after the "velvet revolution" of 1989, his legacy has been revived not only in Prague, but also in Western Europe and the United States. Teige firmly believed in an ars una, free of the artificial separation of one branch of the arts from the other. The concept of ars una is reflected in the essays of this book, which provide intellectual riches without overly compartmentalized attempts at "academic" criticism. Because the only significant writing by Teige to appear so far in English is his well-known argument with Le Corbusier, the "Mundaneum Affair," four essays by Teige have been included. Contributors:Polana Bregantova, Lenka Bydzovska, Rumjana Daceva, Eric Dluhosch, Vojtech Lahoda, Miroslav Petricek, Jr., Klaus Spechtenhauser, Karel Srp, Rostislav Svacha, Daniel Weiss. Published with the assistance of the Getty Grant Program.

Eric Dluhosch is Professor Emeritus of Architecture at the Massachusetts Institute of Technology.